In a First, Union to Put Issues Such as Postal Banking, Expanded Hours and Additional Customer Services on the Bargaining Table, Along with Wages and Benefits
Actor-Activist Danny Glover and APWU Pres. Mark Dimondstein to speak at Kickoff News Conference 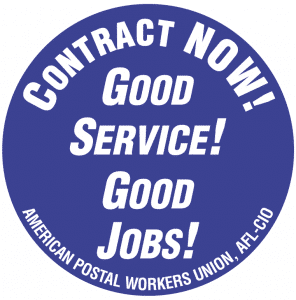 WASHINGTON – Contract talks between the American Postal Workers Union (APWU) and the U.S. Postal Service for a new contract start Thursday, Feb 19. This will be the first time in four-and-a-half years that APWU and postal management have bargained for a new collective bargaining agreement. It also will mark the first labor negotiations for new Postmaster General Megan Brennan.

Along with issues such as fair wages and benefits, the APWU will be proposing bold improvements in customer services, such as postal banking, the sale of licenses, and the addition of public notary services, along with a proposal for longer and more convenient hours for customers to allow USPS to capture a greater share of the growing ecommerce market.

“There are two competing visions of the future of the Postal Service,” said APWU President Mark Dimondstein. “Postal management’s policy has been to severely degrade service, dismantle the postal network, and engage in piecemeal privatization.

“A congressional mandate that forces the agency to pre-fund retiree healthcare benefits 75 years into the future is being used as a pre-text to destroy a national treasure. Management has shortened hours at neighborhood post offices, closed mail processing centers, lowered delivery standards, and slowed mail delivery.

“The Postal Service must take advantage of the explosion in ecommerce to modernize and better serve the people.

The APWU is not alone in its desire to see the Postal Service expand services and reverse many of the destructive practices of former Postmaster General Patrick Donahoe. Just last week, 64 organizations formed “A Grand Alliance to Save Our Public Postal Service.” Actor-activist Danny Glover, the son of postal workers, released a two-minute video endorsing the Alliance.

Glover will join APWU Pres. Dimondstein at the Feb. 19 news conference that precedes the start of negotiations.

For more information on the Grand Alliance visit www.AGrandAlliance.org.

via Postal Workers and USPS to Open Negotiations Thurs. Feb. 19 at Pivotal Time for the Postal Service | APWU.