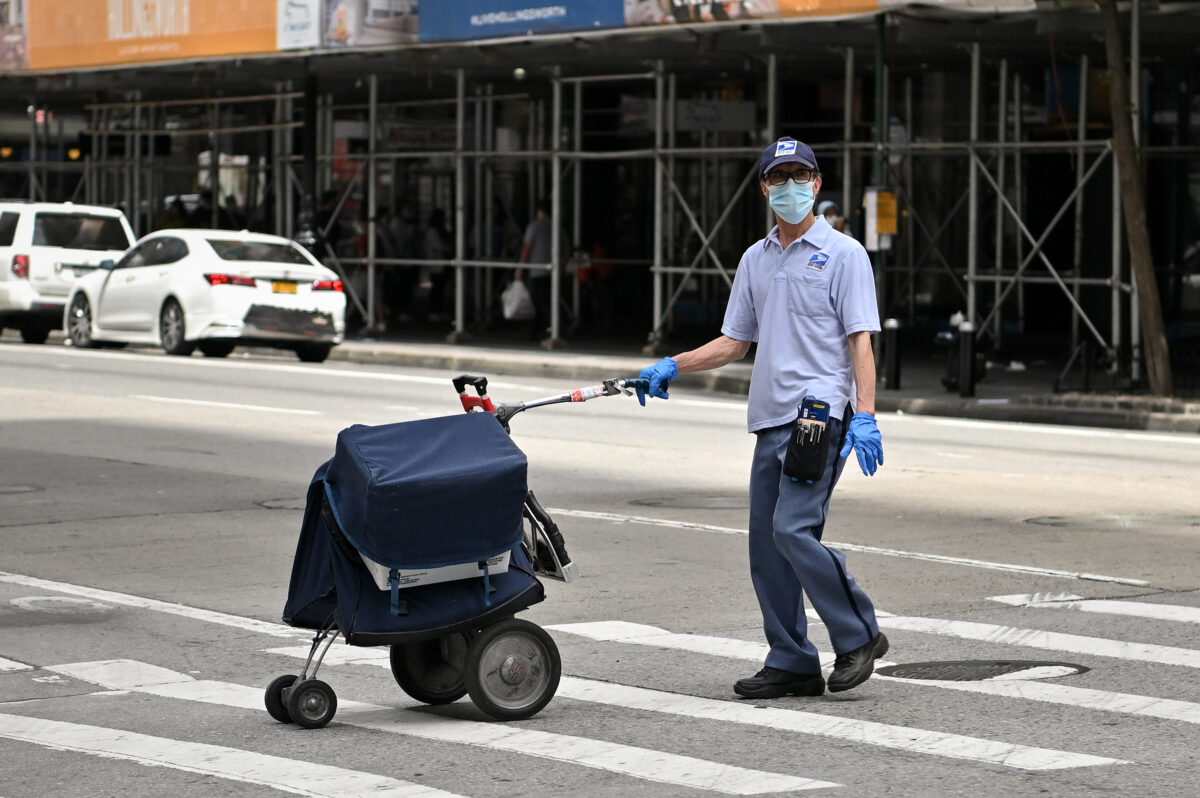 A U.S. Postal Service worker pushes a cart across the street in Midtown Manhattan during the COVID-19 pandemic, in New York City on May 22, 2020. (Dia Dipasupil/Getty Images)

By Zachary Stieber – June 9, 2020
U.S. Postal Service revenue rose by hundreds of millions of dollars during the COVID-19 pandemic, undercutting warnings the agency would collapse if not given federal funding, a group of lawmakers said.

The post office should revise its projections, given that revenue during the first 11 weeks of the pandemic was $330 million higher than the same period in 2019, Reps. Jim Jordan (R-Ohio) and Jody Hice (R-Ga.) said in a letter (pdf) to Postmaster General Megan Brennan.

Sen. Ron Johnson (R-Wis.), the chairman of the chamber’s Committee on Homeland Security and Governmental Affairs—the chief oversight committee of the Senate— also signed the letter.

Brennan warned lawmakers in April that Postal Service (USPS) revenue might decline by $13 billion because of economic lockdowns implemented across the country to try to slow the spread of the CCP (Chinese Communist Party) virus, which causes the disease COVID-19. Brennan said the USPS would run out of money by September.

Jordan, Hice, and Johnson conceded in the letter that forecasting the economic impact of the crisis is complex but expressed concern “that the fiscal reality has rendered the projection” Brennan put forth “unrealistic.”

“USPS revenues were down initially, but they have since recovered dramatically due to an increase in package volume that is apparently rivaling volumes leading up to Christmas. USPS operational costs have increased in some areas due to COVID-19, but they have decreased in other areas due to lower mail volume,” they wrote.

As of June 4, USPS has $13.2 billion in cash, compared to $9.2 billion before the pandemic. The service availed itself of $3.4 billion through short-term notes in early April but even without the notes, the service’s cash position improved by at least $600 million, according to the lawmakers.

A USPS spokesman told The Epoch Times that the service would respond directly to the letter.

Results from the second quarter of fiscal year 2020, or Jan. 1 through March 31, showed revenue of $17.8 billion, an increase of $348 million from the year-earlier period.

The pandemic “began to negatively affect the Postal Service during late March with declining mail volume, and the impact has continued to worsen since then,” the agency said in a May statement while releasing the results.

The USPS wasn’t affected by the pandemic until mid-March, and therefore didn’t have a material impact on the second-quarter results, but “significant impacts” are expected for the remainder of the year.

Even with a slight improvement in its financial position, the USPS needs to be redesigned, according to a recent report (pdf) from the Government Accountability Office.

While the USPS is supposed to be a self-sustaining, business-like entity, it has struggled to maintain viability, suffering net losses of approximately $78 billion from fiscal years 2007 through 2019.

USPS’s unfunded liabilities and debt totaled $161 billion at the end of the most recent fiscal year.

The service’s “current business model is not financially sustainable due to declining mail volumes, increased compensation and benefits costs, and increased unfunded liabilities and debt,” according to the report.

Brennan, meanwhile, will be replaced as postmaster general by Louis DeJoy, a businessman who has donated to President Donald Trump.

DeJoy “understands the critical public service role of the United States Postal Service, and the urgent need to strengthen it for future generations,” Robert Duncan, chair of the board, said in a statement announcing the selection.

DeJoy was previously chairman and CEO of New Breed Logistics, a shipping company with more than 9,000 employees.

Trump said in April that he wouldn’t authorize more funding for the USPS unless it raises shipping rates for Amazon and other companies for which it handles packages.

“The Postal Service is a joke because they’re handing out packages for Amazon and other internet companies. And every time they bring a package, they lose money on it,” Trump told reporters at the White House.

Amazon and other online-based companies are dropping a big portion of packages off at post offices, leaving the Postal Service to deliver them but lose money in the process, the president said. The USPS should raise prices by about four times, he added.

“For some reason—these people have been in there a long time—but for some reason, they’re very cozy with some of these companies, and they don’t raise the price of a package,” he added.