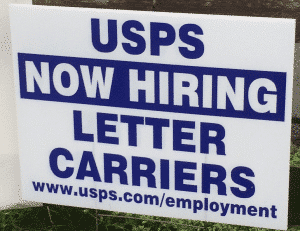 “In the Cedar Rapids-Iowa City area, we see 40 percent parcel growth rates on what we are delivering.”

Herrmann said the number of postal employees retiring also is driving the need for more people to deliver the mail.

“A fairly high percentage of our employees are eligible to retire,” he said.

Following on the successful response it received at a similar event in November in Des Moines, Herrmann said the postal service is holding a job fair from 9 a.m. to 2 p.m. Saturday in Iowa Hall on the Kirkwood Community College campus.

“We had almost a thousand people show up when we were hiring clerks for the holiday season,” Herrmann said. “The majority of them were already employed, but looking for a better job.

Herrmann said carriers, who deliver in the city primarily on foot, will typically work a 40-hour week, whereas a rural carrier who delivers by vehicle will work up to 40 hours per week. Starting pay for both types of carrier is about $16 per hour with limited benefits, but the work is not for everyone.

“A carrier in the city will walk about 10 miles each day,” Herrmann said. “Unfortunately, we go through a fair number of people that we hire because they don’t realize how cold it can be this time of year.”

Herrmann said newly-hired carriers are not initially career USPS employees. As retirements and vacancies occur, new carriers are promoted to career employee status with the accompanying pay and benefits.

“It’s a great job,” Herrmann said. “Scanning technology has enabled carriers to spend less time sorting their mail before they go out on their route. What used to be about four hours getting their mail in order of delivery has been reduced to as little as an hour.”