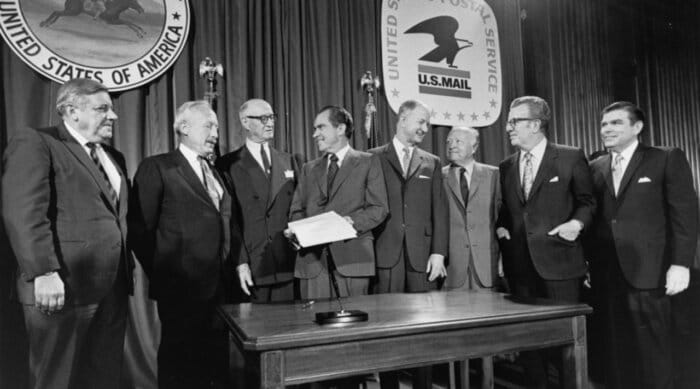 By Dan Kuralt – September 7, 2020
As I listen to, and read all of the moaning and groaning by Democrats and writers with an “opinion” in the press and elsewhere, I find myself wondering where all these people were when the U.S. Postal Service was undergoing it’s long slide downward.

Joe Biden was around, as was Nancy Pelosi and other movers and shakers in the Democratic Party. So were the Republicans. The Republicans were honest about their beliefs. They wanted the USPS to be a private business. The Democrats bought into it, and so did the news media. They bought into the Board of Governors, whose main job was the ruin of the USPS. They all stood around sucking their collective thumbs. The Postal Reorganization Act was the means to the end.

As an officer of the Springfield Area local of the American Postal Workers Union I sat in on meetings with then Postmaster General Tony Franks and others, such as our recently retired PMG Meghan Brennan. Franks’ big thing was jokes about his last name…”Frankly speaking” etc. He didn’t last long.

I asked Franks a few pointed questions and our local Postmaster almost had heart failure. I asked why USPS didn’t handle packages like Mail Boxes ETC and others such as UPS when they took them in. He made a joke about penny ante outfits. Fly by nighters. Franks didn’t have a problem with the question, as he wasn’t serious about the USPS. He was a businessman and USPS wasn’t his business. I went home from the meeting and found a flyer from Mail Boxes ETC stuffed in my mailbox. It suggested that I use them to mail my Christmas packages.

The only thing that the Postal Reorganization Act has done for the USPS is run it into the ground. Stripping down the business is not going to make us break even. Unless the Congress and cable TV gets serious about the mail system, it’s lights out.