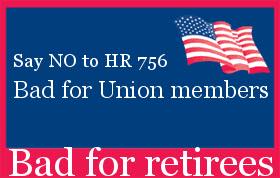 In HR 756 it is evident that the employees of the USPS will be greatly affected by the changes the Bill proposes. Most importantly FORCED MEDICARE INTERGRATION as well as a change in delivery for both business as well residential. The forced Medicare integration will effect every current retiree as well as every employee currently employed by the USPS. A change in delivery to our valuable customers will effect the NALC and the carriers they represent. If this bill is passed, the end result on the carrier craft will be thousands of carrier positions no longer needed and, through attrition, the carrier craft will be considerably smaller. The NALC has for years fought to save door to door delivery as well as 6 day delivery. I’m perplexed at the 180 degree change by the NALC and have yet have not heard a valid reason as to why the NALC has changed its view on door to door delivery.

Legislation is much like contract negotiations to put it in simple Union terms. The Lawmakers want to garner as much support for their bill in Congress to better the chances of its becoming law. There is often times a give and take from opponents and the proponents. As I read the bill, I do not see what the Unions “received“ in an effort to give their support to a bill that seems only to benefit the USPS and big mailers. The other issue I see is the four Postal Unions short shortsightedness. Speaker of the House Paul Ryan has made it well known that the Republican Congress’s goals are to reform Medicare and replace the ACA. What impacts with changes to Medicare and ACA have on the “savings“ that HR 756 is supposed to provide? Remember the “savings“ that HR 756 is supposed to create is based on Medicare and ACA staying exactly the way those systems currently are.

Why did the Unions not push to have wording that would reinstate 2012 Mailing Standards? I worked closely with the previous APWU Legislative Director and certain members of Congress in the 114th Congress to get 2012 Standards back. Why is Service Standards so important?

By inserting 2012 Service Standard language, it would direct the USPS to provide mail service at an acceptable level. In many areas nationwide the USPS closed plants only to discover they cannot provide the mail service our communities need and deserve. Given the USPS’s admissions to the PRC that the Phase Two consolidations and closures that went forward with the January 5, 2015 slowdown COST the USPS 66 million dollars. Reopening rural plants appears will do nothing but improve USPS finances.

It is also worth noting that per the Postal Regulatory Commission’s opinion in 2015, the USPS first claimed savings of $2.1B for this wrongheaded approach of slowing down the mail and closing mail processing facilities. This was lowered to $1.6B in 2012 and now they admit the savings are at best $865M for Phase one and a cost of $66M for a partial phase two. This lowers the savings to $799M without any consideration of revenue driven away by poor service, which is considerable.

The USPS claims the lost revenue of mail being too slow for customers’ needs is only $500M dollars, but the PRC found that the Commission could not replicate those low numbers of lost revenue. The APWU was made accidentally aware during testimony by an employee of All Market Research of an initial market research study of the Network Rationalization Plan paid for by the USPS that had revenue lost by this slow down of the mail scheme at $5.2B and net loss of the Plan at $1.9B dollars. After these results were given to the USPS the USPS changed parameters and arrived at the new lower figure the PRC could not replicate.

By changing the Service Standards and the closing of plants, the USPS basically shot itself in the foot. The savings it promised were not realized and in fact cost the company in the billions. As I have gone through HR 756 , there is no mention of re-instituting 2012 Service Standards. Rather than trying to save money on the backs of the retiree’s and cutting of mail delivery, why are we not pursuing other methods that we can prove will in fact save the USPS money.

Now there will be those within the Union at every level who will say it would be impossible to get such wording added or presented. I can personally tell you this is untrue as it has happen and was in fact added to the FY 2016 Appropriations Bill. The exact wording was as follows:

“In the “United States Postal Service—Payment to the Postal Service Fund” account, insert before the period at the end of the following: “:Provided further, That the Postal Service shall maintain and comply with service standards for First Class Mail and periodicals effective on July 1, 2012”.”

Unfortunately this wording was asked to be removed the day before the reconciliation of the bill. I believe the Union should continue to work on getting 2012 Service Standards law. I still feel that this wording is imperative and by going back to 2012 Mailing Standards and re-opening plants the USPS gains savings and the APWU protects jobs and represents its members as it should.