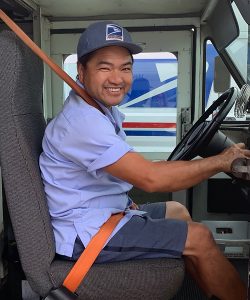 Letter Carrier Joseph Ho was delivering mail in a Chester, PA, neighborhood when he spotted an older customer who has Parkinson’s disease lying on a sidewalk near the man’s residence.

Ho rushed to check on the customer, who was bleeding profusely from a head wound. The Postal Service™ employee immediately called 911, alerted the man’s wife, rendered first aid to slow the bleeding, and comforted the couple until paramedics arrived.

The hurt customer was treated at a hospital, where physicians credited Ho with saving the man’s life.

His wife later mailed a letter to the local Post Office™. “Joe deserves recognition for being a stellar employee and one heck of a kind, caring man,” she wrote. “My husband and I can’t say ‘thank you’ enough.”

Ho is one of several thousand employees who have been recognized through the Postmaster General (PMG) Heroes’ Program. These men and women have gone above and beyond the call of duty in a variety of situations, such as assisting lost children, getting help for sick or injured customers, spotting fires, and more.

Now in its eighteenth year, the program is based on a simple idea: Postal Service employees know the habits of their customers and the rhythms of their communities, and are often the first to notify emergency personnel and render aid when something is wrong.

Employees must be nominated for the PMG Hero Award. Corporate Communications reviews nominations for accuracy, then sends them to the Inspection Service and the Office of Inspector General for approval.

To nominate an employee, complete PS Form 400, Corporate Communications PMG Hero Nomination, and email it to PMG_HeroNominations@usps.gov. To download or print the form, go to usps.link/heroes, where you can also find the “Heroes’ Corner” archives and read more stories about heroic employees.