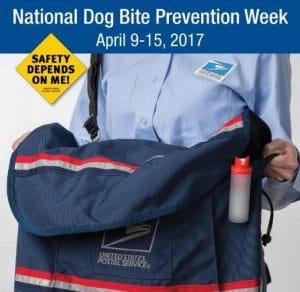 The U.S. Postal Service® continues its tradition of calling attention to one of the nation’s most commonly reported public health problems: dog attacks and bites. From nips and bites to actual attacks, violent dog behavior continues to pose a serious threat to our employees.

Previously, National Dog Bite Prevention Week (NDBPW) took place during the third week of May. We are moving it to the second week of April since warmer weather means more dogs outdoors.

This year, NDBPW is Sunday, April 9 through Saturday, April 15. To build momentum for media attention, the national kick-off takes place Thursday, April 6. A news release issued that day on about.usps.com/news/welcome.htm will provide the top 30 city rankings of dog attacks.

To emphasize the enormity of this issue, we are reporting the number of dog attacks and bites as one number. Last year, 6,755 Postal Service™ employees were victimized by dogs, an increase of 206 attacks over calendar year 2015.

Sponsored by the U.S. Postal Service, National Dog Bite Prevention Week is a public service campaign that offers safety tips and emphasizes the need for increased owner responsibility in the prevention of dog attacks.

The tools available in this kit, and additional tools now electronically posted, will guide you in promoting awareness of this public health concern in an effort to reduce dog attacks and bites in your community.

Please take full advantage of our field communications professionals listed in this kit when promoting this initiative.

How to Avoid Being Bitten

How to Be a Responsible Dog Owner