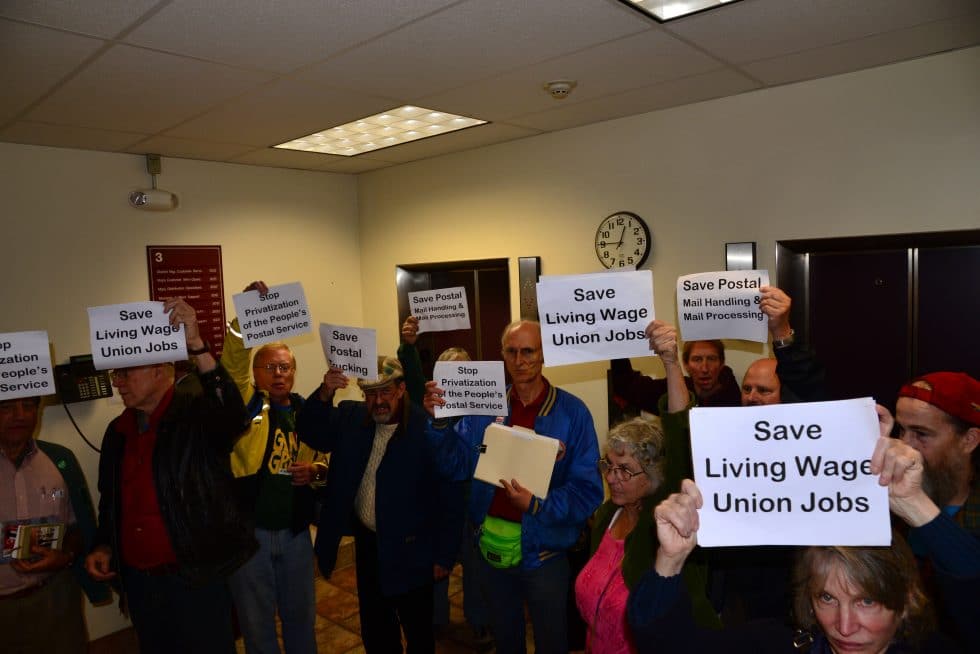 Immediate Release, January 8, 2015
For the fifth time in two years, the “postal defenders” won a reprieve yesterday. County Judge Eric Bergstrom dismissed criminal charges in a civil disobedience protest case which was over a year old, saying the seven defendants’ constitutional right to a speedy trial had been violated.

Portland’s “postal defenders” vowed to continue their defense of the people’s postal service, in a struggle with a US Postal Service management that insists on dismantling and out-sourcing postal infrastructure. “This privatization and union-busting is being carried out in the name of a phony financial emergency,” said Rev. John Schwiebert, one of the “defenders” who has been arrested and let off in five different postal protests. “The security, safety, and timely delivery of the mail are all at risk. Rural communities, seniors and the disabled, small businesses and low-income communities are hit the hardest. Postal management needs to stop and reverse these closures, cuts, and subcontracts which are sending our beloved postal service into a death spiral.”

The protesters immediately turned from celebrating their victory to organizing to defend the eighty-two mail processing plants, including three in Oregon, due for closure in 2015. In anticipation of the closures, the postal service this week changed service standards, delaying every class of mail across the nation and virtually eliminating overnight first class delivery.

The USPS has slashed hours at half the nation’s post offices — mostly rural — putting retail postal services out of reach for most working people. And as public post offices are being cut and closed, postal retail counters are being set up in Staples and Walmart, run by low-paid, poorly trained store clerks.

Judge Bergstrom’s dismissal of trespass charges involved an October 29, 2013 action, when fifteen activists had gathered in the third floor lobby of the Main Post Office in downtown Portland, holding signs and carrying a petition with over a thousand signatures protesting postal privatization. Seven were arrested while attempting to negotiate a meeting with the USPS District Manager.

The action followed months of attempts to gain a meeting with senior postal managers — including requests from postal union presidents, from Congress people, from community groups – to discuss an end to privatization of postal jobs. Despite the October arrests, “postal defenders” continued their attempts during 2014 to meet with postal managers, including a visit to the home of the District Manager last June.

Portland Communities and Postal Workers United (PCPWU), organizers of the action, have been fighting cuts and closures to the postal service for the past several years. In May of 2012, ten activists were arrested occupying Portland’s University Station post office, which has since been closed. In April, 2013, five protesters went to jail for a civil disobedience action at the Salem mail plant, which has since been dismantled with mail processing machines moving to Portland. The same group was arrested in July occupying the private Matheson mail handling plant and has blockaded Dill Star Route, Inc. trucks multiple times, demanding those companies stop stealing family wage, union postal jobs. In December of 2013, the postal defenders occupied the Eugene/Springfield mail processing facility, which had been slated for closure the following month.

PCPWU claims some victories in their battle to save the postal service: in early 2014 the Postmaster General suspended the closures of all mail processing plants. The Matheson corporation backed out of a deal to take local mail handling and processing jobs from union postal workers.

All the USPS cuts, closures, and contracting-out have been done in the name of a “financial emergency”. Since 2006 the USPS has been forced to spend nearly 10% of its budget pre-funding retiree health benefits 75 years in advance. No other U.S. agency or private business faces such a crushing financial burden. Not only would the postal service have been profitable without the mandate, the USPS has also over-paid tens of billions into two pension funds.

In 2013, the Postmaster General closed 45% of mail processing plants, reduced hours by 25% – 75% in a third of the post offices, put 10% of post offices up for sale, subcontracted trucking and mail handling, eliminated tens of thousands of family wage, postal jobs and delayed mail delivery.

The USPS own studies (revealed at the March 22, 2012 meeting of the Postal Regulatory Commission), showed that big mailers leave the system as a result of such delays, costing more in lost revenue than is saved by lowering labor costs, not to mention the dramatic increase in trucking costs as mail is transported hundreds of extra miles to be sorted in the closest still open facilities.

The postal service is not broke. Cutting, closing and subcontracting work is unnecessary and costly. However, the agenda of corporate America, their friends in Congress and in postal management, according to the PCPWU, is to cripple the USPS, to soften it up for union busting and privatization. The USPS is a $65 billion annual business with over $100 billion surplus in its pension and retiree health benefit funds, over 30,000 post offices and 200,000 vehicles. Postal activists claim that America is being confronted with a huge transfer of public wealth to for-profit, private corporations.