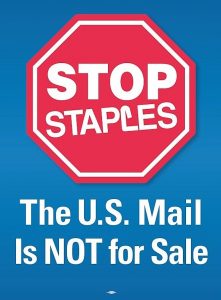 The group demonstrated outside the Staples store on Penn Avenue, where the U.S. Postal Service has set up non-union operations.

Those in the Union fear that the U.S. Postal Service will ultimately close post offices, putting people out of work.

“The postal service has a plan to close almost all window operations, except heavy ones, across the county,” said John P. Richards, of the American Postal Workers Union. “Thousands of them they want to close, and force customers to come to places like this.”

Some people say Staples is not a safe place for the mail.