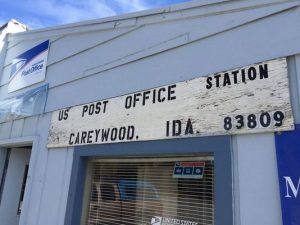 CAREYWOOD – The Postal Regulatory Commission is taking up an appeal of the U.S. Postal Service’s plan to close the Careywood Post Office.

The commission posted the appeal to its website on Thursday. Under federal law, the commission is required to issue its decision within the next six months.

A customer, Marrion Newsam Banks, protested the closure, arguing that the postal service was disregarding her right to due process and saddling her and other customers with additional expense not easily borne by her and other residents who subsist on limited incomes.

Banks further contends that the closure will rend the social fabric of the community and effectively wipe Careywood off the map.

“This action by the USPS, if completed, will have a disastrous and negative impact on Careywood and its residents. The post office is the heart of Careywood and has been since the 1800s,” Banks said in her letter of protest.

The postal service said it sought to close the facility because of the Idaho Transportation Department’s plan to eventually widen U.S. Highway 95 through Careywood and its alleged inability to reach a tenable contract with Carrie Bartelt, who operates the post office.

Bartelt, however, said no contract negotiations ever took place. Moreover, plans to widen U.S. 95 in Careywood is decades away due to a shortage of state highway funding.

Closure appellants contend that the postal service is sidestepping its own closure regulations, which require it to open a 60-day comment period and allow for a 30-day appeal period.

Banks said the comment period was shortened to 39 days and provided no window for appeal.

Banks said the closure would extend her daily round-trip mail run from 7 miles to 22 miles, adding an annual cost of $5,175 in order to obtain her mail.

“Essentially, the USPS is trying to save money by taxing each and every Careywood Post Office customer to the tune of approximately $5,000 per year in increased driving expense,” Banks said.

Banks adds that a rural route mail box is not an option for many residents due to theft and vandalism. The post office is more secure for sending and receiving business or financial correspondence.

Careywood journalist Mark Glenn said he uses the post office daily to conduct business and closing it would cause an unimaginable headache for him and others.

“I do not understand entirely the criteria being used in making this decision, and to be quite honest and am quite baffled that anyone within the USPS would consider doing such a thing considering the invaluable service this particular office brings to this small community,” Glenn said in letter to the postal commission.