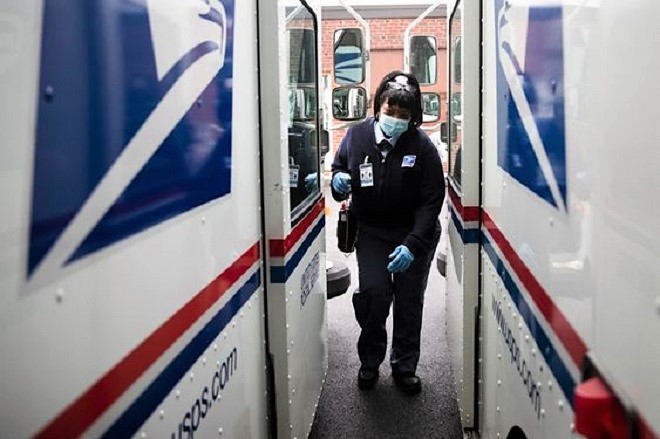 Two pieces of legislation aimed at reducing the financial burden on the U.S. Postal Service and modernizing its operations passed out of committee May 13. (Matt Rourke/AP)

By Jessie Bur – May 14, 2021
Employees of the U.S. Postal Service could soon be included in federal provisions guaranteeing 12 weeks of paid parental leave under legislation reported favorably out of the House Oversight and Government Reform Committee May 13.

The first bill would eliminate the prefunding mandate for USPS retiree health care, one of the greatest financial strains currently placed on the agency.

“No private company or federal agency is required to comply with such a burdensome and unfair prefunding requirement,” said Rep. Carolyn Maloney, D-N.Y. at the committee hearing.

Retirees would also be required to enroll in Medicare, which, when combined with the prefunding elimination, is estimated to save the agency approximately $46 billion over 10 years.

But the National Active and Retired Federal Employees Association expressed concerns about the health-care provisions included in the bill as more far-reaching than the legislation’s objectives actually intend:

“NARFE is concerned that the current structure and language of the bill could result in increased premiums for federal employees and retirees enrolled in FEHB plans. Specifically, the bill would separate postal employees and Medicare-covered postal retirees from FEHB into a new Postal Service Health Benefits program, but it would leave postal retirees without Medicare in FEHB. In doing so, the bill allows for the Postal Service to cherry-pick individuals who are less costly to insure, and leaves individuals who are more costly to insure in the federal population. This could cause FEHB premiums, which are based on the cost to insure, to increase.”

Maloney acknowledged in the hearing that the bill would likely require some technical amendments before its final passage “to ensure that postal employee benefits are protected.”

The legislation would also require USPS to establish a public facing website that shows weekly metrics for how quickly mail is being delivered across the U.S., as a means of increasing accountability for timeliness standards in the future.

The agency would prohibited from significantly increasing the cost of magazines and periodicals but would be allowed to enter into agreements with state, local and tribal governments to provide non-commercial services like hunting and fishing licenses.

The Inspector General Office for USPS and the Postal Regulatory Commission would also be combined into a single watchdog office.

The Postal Service Reform Act evolved from recent bipartisan negotiations, and received support from both sides of the isle and unanimous approval in the committee voice vote.

The contents of the Postal Service Improvement Act, which includes provisions for paid parental leave, proved more controversial with some committee members.

“These benefits far outpace what employees in the private sector receive. These benefits were not extended to Postal Service employees because of the cost burden they would impose on an independent agency, with a large and already well-compensated workforce,” said Rep. James Comer, R-Ky.

“The Postal Service is already overburdened with the benefits it has promised to its employees, and that is what has landed them in so much financial trouble.”

That bill would also require USPS to place a trackable barcode on all election ballots, so that voters and election oversight authorities both have increased assurance that mail-in voting occurred as it was supposed to.

Amendments to that bill would allow USPS managers and supervisors to appeal prohibited personnel practices to the Merit Systems Protection Board; mandate that postmaster general and deputy postmaster general be prohibited from serving until their financial disclosure statements are validated; extend timely negotiations requirements for pay and benefits to supervisors; authorize $8 billion to acquire an electric fleet with electric charging infrastructure; require USPS to work with the Census Bureau to involve letter carriers in the 2030 enumeration process; require USPS to maintain a one to three day first-class mail service; and allow elected officials who have jurisdiction over postal facilities to be granted entrance to those facilities.

That bill passed out of committee on a 23 to 17 vote and faces a harder path to full congressional passage.