Hundreds of Roanoke postal workers’ jobs will be eliminated.
(July 5, 2014) Most Americans have never heard of the Postal Accountability and Enhancement Act of 2006. The mind-numbing title alone sounds like it could put a hardcore insomniac to sleep. The truth is, it’s one of the most insane laws Congress ever enacted.

It’s past time for people in the Roanoke Valley to wake up about it. Because that legislation, sponsored by a (former) Virginia congressman, has real potential to kill 300 to 400 blue-collar jobs here in the Star City. Those have a combined payroll of more than $1 million annually.

My colleagues Matt Chittum and Zach Crizer wrote about those coming job cuts in last week’s paper. The U.S. Postal Service announced a consolidation plan that would move mail-processing operations now in Roanoke to Greensboro, North Carolina. Roanoke is one of 82 such operations around the country that would be closed.

Those cuts could slow your mail, because a cross-town birthday card may have to go to Greensboro and back before it’s delivered. Among the hundreds of jobs on the line are those held by 120 military veterans, 80 of whom are disabled.

Closing operations here may also cost bulk mailers the discount they now get for doing business in a city with a mail-processing center. Maybe those companies will go away, too. That’s even more jobs.

This is necessary, we’ve been told, because the postal service is deeply in the red to the tune of $46 billion in accumulated debt. It is indeed facing a financial crisis. But almost the entire reason for the crisis is that insane 2006 law. 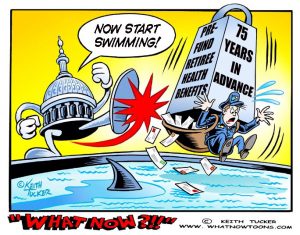 It requires the self-supporting U.S. Postal Service, which receives not one dime in taxpayer subsidies, to fully fund its retirees’ health benefits for 75 years into the future. It also requires that money be set aside over a 10-year period, at a rate of more than $5 billion per year.

That means the postal service is now paying for the future health care of retirees it has not yet hired, and who in some cases have not yet been born. No other public or private company in the nation bears any kind of financial burden like that.

Even worse, none of that money is truly being set aside. Instead, it is going directly into the U.S. government’s general fund, and it’s being spent on current government operations. The set-aside is a theoretical accounting gimmick. Those future retirement liabilities are actually being added to the national debt.

Who sponsored this cockamamie legislation? It was former Rep. Tom Davis, a Republican from northern Virginia who served in Congress from 1995 until 2008. He’s now a Washington lobbyist for Deloitte, a huge accounting and consulting company.

Last week I reached out to Davis to learn how and why this happened. One thing you should know is that the bill was bipartisan. The cosponsors were Reps. Henry Waxman, D- Calif., Danny Davis D-Ill. and John McHugh, R-New York.

The surprising thing I heard from Davis was that he agrees the future-funding retirement provision was crazy. That was never in the original legislation, he said.

Instead, the 90-page bill made a bunch of bureaucratic changes, few of which the average American would give a hoot about. It also placed a temporary moratorium on rate increases and established a less cumbersome system under which rates could be increased moving forward.

Somewhat ironically, the bill was intended to help the Postal Service be more competitive for the future, Davis said. But late in the game, the Bush White House threatened to veto it unless Congress added the future-funding-for-retirees provision.

Congress went along because at the time it seemed like it was a better option than having the entire bill defeated, Davis said.

“That was the cost of getting the bill through,” Davis said. The Bush administration used the revenue it gained to help balance the budget.

Coincidentally, mail volumes peaked in 2006. Then the 2008 recession caused a further drop. The postal service has never really recovered from that, Davis said. Electronic communication has eaten into first-class mail, which has continued to decline.

So there is the back story on how legislation designed to save the U.S. Postal Service became a law that is actually killing it.

Davis said the postal service would still be losing money today even without the future-funding provisions. That’s debatable though. Carlton Cooper, president of Roanoke’s Local 482 of the American Postal Workers Union, told me that the postal service was $311 million in the black in 2013, aside from the onerous retirement funding.

Congress has known about this problem for at least five years, and it’s been twiddling its thumbs while both small post offices and large mail processing centers have been shuttered. In the past 20 years, Cooper said, the postal service has eliminated 211,000 jobs. Now it’s striking closer to home.

On Thursday, I reached out to Rep. Bob Goodlatte, R-Roanoke County. In a statement emailed from his office, he said, “The debate in Congress on postal reform has been long and heated. It is not about whether reform is needed, but how it would best be accomplished and how any savings from this reform would be best utilized. There are several ideas, and I am considering the impacts of these proposals.”

There is one simple reform that could end the postal service’s financial crisis tomorrow: remove that future-funding provision. That would add more than $5 billion annually to the postal service balance sheet.

It would be like dousing a blazing house that also has some leaky pipes. Putting that fire down would allow the homeowner to fix the plumbing issues, rather than letting the whole place go up in smoke.

Unfortunately, the politicians on Capitol Hill are so politically divided right now that they couldn’t agree on a resolution establishing our first president’s last name. FYI, it is Washington. He was a statesman — unlike the people in Congress, who are fiddling while the postal service burns.

Cooper asked me to put out a call to readers for them to contact Goodlatte’s office, as well as those of Reps. Morgan Griffith, R-Salem, and Robert Hurt, R-Pittsylvania County.

Give them a call. Perhaps it will do some good. But don’t get your hopes too high.

Congress has known about this problem for five years. And they’re considering ideas? And evaluating impacts? Come on.

via Casey: The most insane law by Congress, ever? – Roanoke Times: Dan Casey.