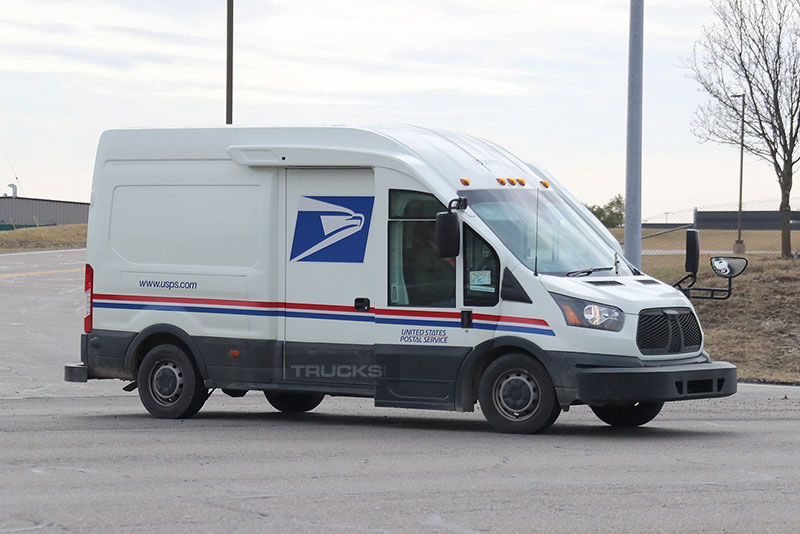 Oshkosh Corp.’s USPS mail truck prototype was spotted testing in rural Ohio. Oshkosh is working with Ford on the development of the truck. (Photos: Brian Williams/Trucks.com)

By Jerry Hirsch – March 06, 2018
Ford Motor Co. is working with Oshkosh Corp. on a bid that could be worth more than $6 billion to develop the next mail truck for the U.S. Postal Service.

At least one prototype of the truck, which is based on Ford’s Transit cargo van, was seen undergoing testing in rural Ohio.

Oshkosh is one of five companies competing in the USPS’ Next Generation Delivery Vehicle Program. But Ford wasn’t known to be a partner in its venture until the prototype was recently spotted.

Trucks.com photos of the vehicle show that it has the Ford Transit body with modifications to the doors and cargo area by Oshkosh to meet USPS requirements. It also has the same headlamps and taillights Ford uses in the Transit as well as a similar grille shape and driver cockpit. 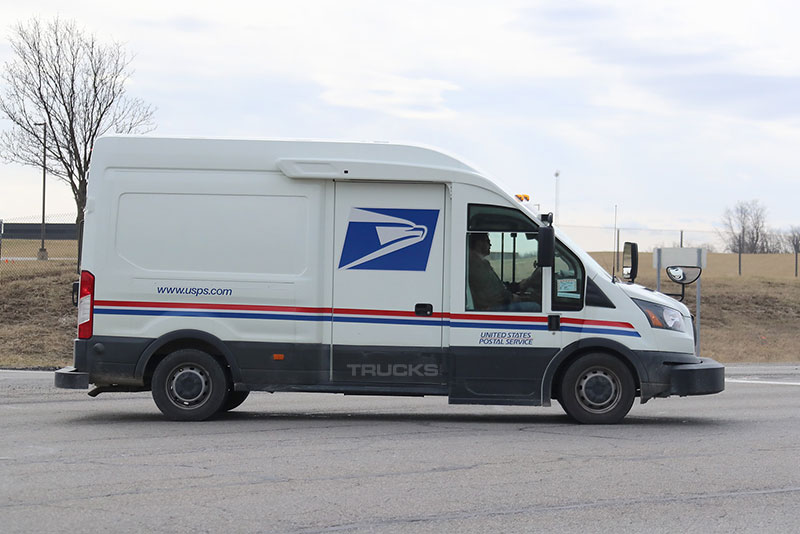 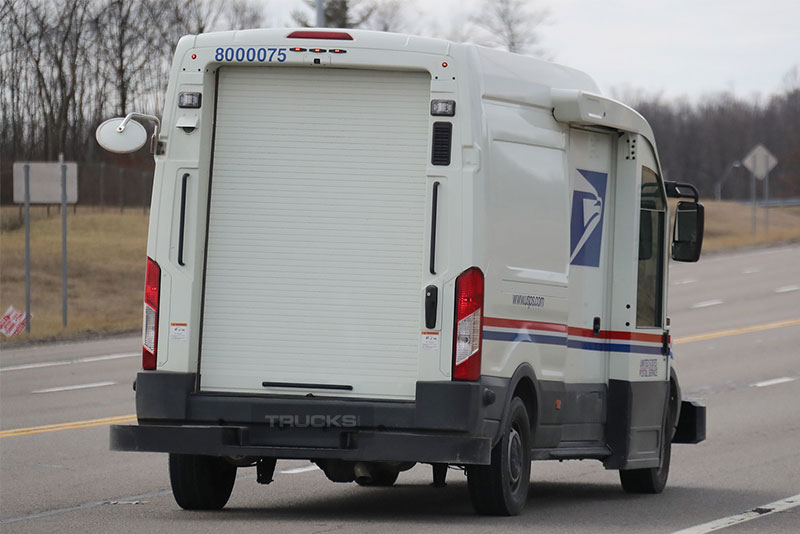 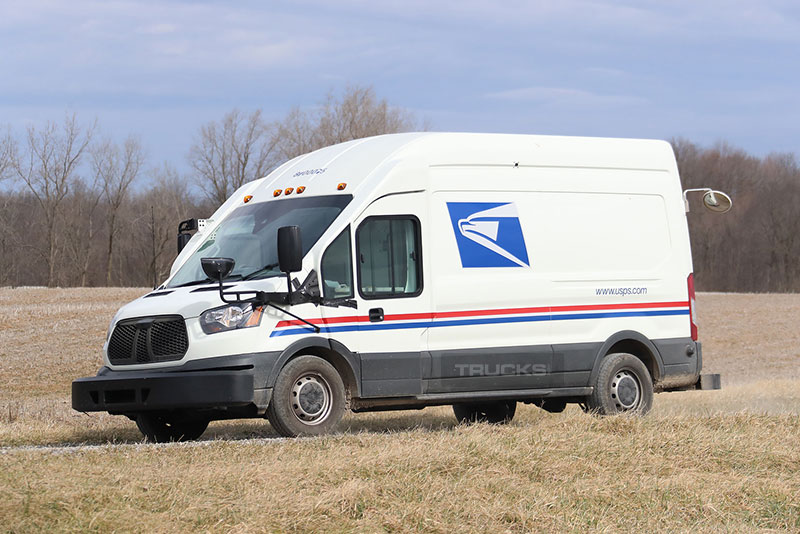 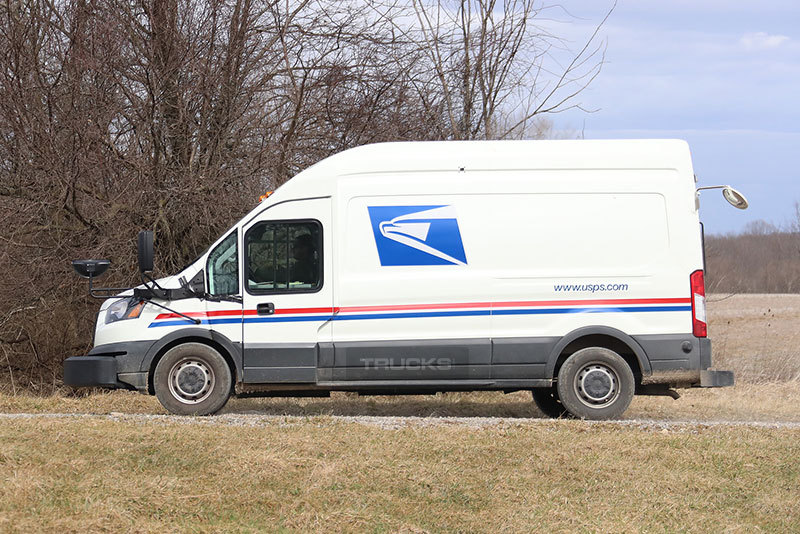 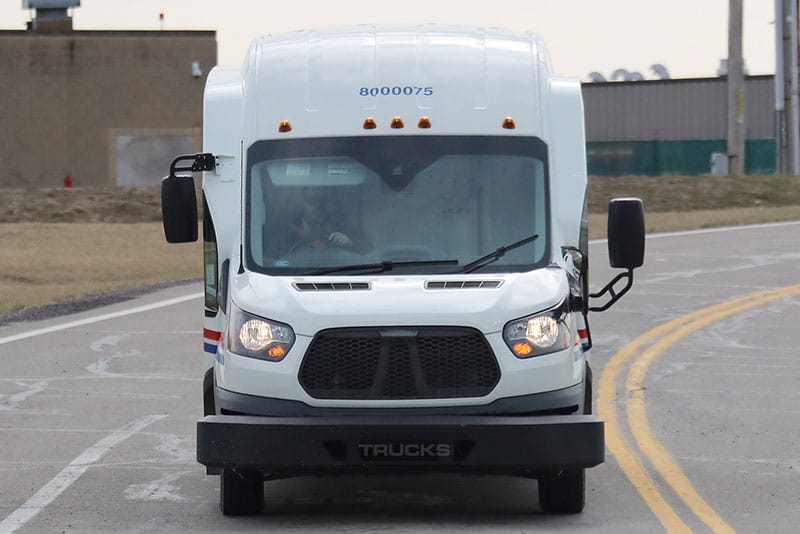 Ford confirmed that it is working as a supplier to Oshkosh. A spokeswoman for Oshkosh declined to discuss the bid except to confirm that it is one of the companies providing prototypes for the Postal Service to evaluate.

Although the agency also is looking at prototypes from other manufacturers that employ battery-electric and plug-in hybrid powertrains, the Oshkosh-Ford entrant has an internal-combustion engine.

Cameras are located on the front, back and both sides of the vehicle to give the driver a better view of the truck’s surroundings. They could provide a 360-degree view similar to technology inside the Ford F-150 pickup truck.

The right-side cargo door appears to be powered. The USPS eagle logo is painted on each side of the truck.

The Oshkosh-Ford truck looks to be larger than the other four vehicles the Postal Service is evaluating. It is the high-roof version of the van, which would allow mail workers to stand in the cargo area while loading and unloading. It was undergoing tests on both paved and dirt roads in frigid weather last week.

The USPS will choose models from the prototypes to replace up to 180,000 aging mail trucks. Of the 215,000 in operation, 140,000 are at least two decades old. The changeover — which may be incremental, replacing 12,000 trucks at a time — could take place over the course of seven years. The contract is worth an estimated $6.3 billion.

The Transit is produced at Ford’s Kansas City assembly plant in Claycomo, Mo. It is the leading Euro-style cargo van in the U.S. Ford sold 127,360 last year, more than triple the volume of the next best seller, the Ram ProMaster Van from Fiat Chrysler Automobiles.

In addition to the Oshkosh/Ford entry, the Postal Service is testing vehicles from other teams.

Karsan Otomotive, a Turkish truck maker, is working with Morgan Olson, a Sturgis, Mich., manufacturer of walk-in vans that has a longstanding relationship with USPS. The pair submitted a plug-in hybrid van that was spotted alongside the Oshkosh vehicle last week.

VT Hackney/Workhorse Group also are participating as a duo to offer up an electric mail truck. The Hackney prototype shares many components with the Workhorse W-15 electric pickup truck.

Testing of the prototypes started last fall. The USPS has been running the trucks up against extreme weather conditions, including cold climates in rural Ohio and Michigan and hot weather areas such as Tucson, Ariz. Other test locations include Tempe, Ariz.

The USPS said it would choose the contract winner in early 2018. On Friday the agency declined to comment on the status of its decision.