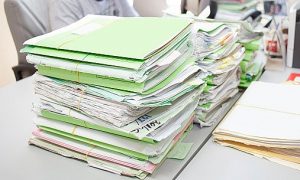 The Office of Personnel Management got a break last month from the massive wave of new retirement applications that had flooded the agency in the first two months of the year.

OPM “only” received 5,741 new applications in March, down significantly from the five figure numbers that rolled in during each of the previous two months. Additionally, OPM was able to process 9,222 applications in March to bring the outstanding backlog down slightly from 22,692 to 19,211, a 15% reduction. That number also outperformed the processing rates from January and February.

As noted previously, this ebb and flow in the number of retirement applications in OPM’s backlog is a consistent pattern. However, OPM is running slightly ahead of March 2015 at which time the backlog stood at 20,594.

Source: OPM Gets Some Reprieve from Influx of New Retirement Applications : FedSmith.com