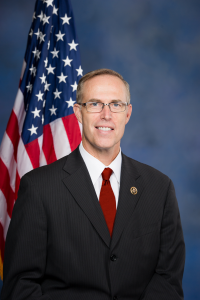 “Earth Day calls on us all to become better stewards of the planet, and to identify ways to protect our environment for future generations,” said Rep. Huffman. “The Postal Service is one institution with a lot of room for improvement, crippled by an inefficient, outdated fleet, with most of these vehicles reaching the end of their operational lives. The FLEET Act will help invest in a modern, efficient Postal Service fleet and transform our nation’s largest civilian fleet into a global leader in efficiency and innovation.”

“Transportation is now a leading source of climate pollution and we welcome this effort to put the USPS on the path to cutting oil consumption,” said Howard Learner, Executive Director at the Environmental Law & Policy Center. “Climate change is impacting the Great Lakes and we need to take every step we can to cut the pollution causing it.”

“Neither rain nor sleet nor inertia should keep postal vehicles from slashing oil use, pollution and saving taxpayers money at the pump,” said Dan Becker, Director, Safe Climate Campaign.

“The FLEET Act is a win-win on many levels, said Marc Yaggi, Executive Director of Waterkeeper Alliance. “The Act will provide the U.S. Postal Service- which operates the largest civilian fleet of vehicles in the world- with a realistic plan to reduce greenhouse gas emissions while cutting costs for the financially challenged federal agency. We applaud Rep. Huffman and his cosponsors for their innovative, forward-looking approach to energy efficiency and fiscal responsibility as we modernize this dirty, wasteful and costly line of vehicles.”

The USPS owns and operates the world’s largest civilian vehicle fleet, comprising more than 232,000 mail delivery vehicles. Over 141,000 of these vehicles are aging Grumman LLVs, which average only 10 miles per gallon. This vehicle first entered service in 1987, and the majority have reached the end of their 24-year operational lifespan. Fueling these vehicles comes at a high cost: in fiscal year 2016, the USPS purchased 251 million gallons of diesel at a cost of more than $570 million, making the USPS one of the largest consumers of diesel fuel in the United States.

Huffman’s FLEET Act of 2019 will save the USPS hundreds of millions of dollars in annual fuel and maintenance costs by directing the Postal Service to modernize its antiquated and inefficient fleet. The FLEET Act will achieve cost savings by reducing expenditures on petroleum fuel and maintenance, while establishing benchmarks to transform the USPS fleet into a global leader in efficiency and innovation.