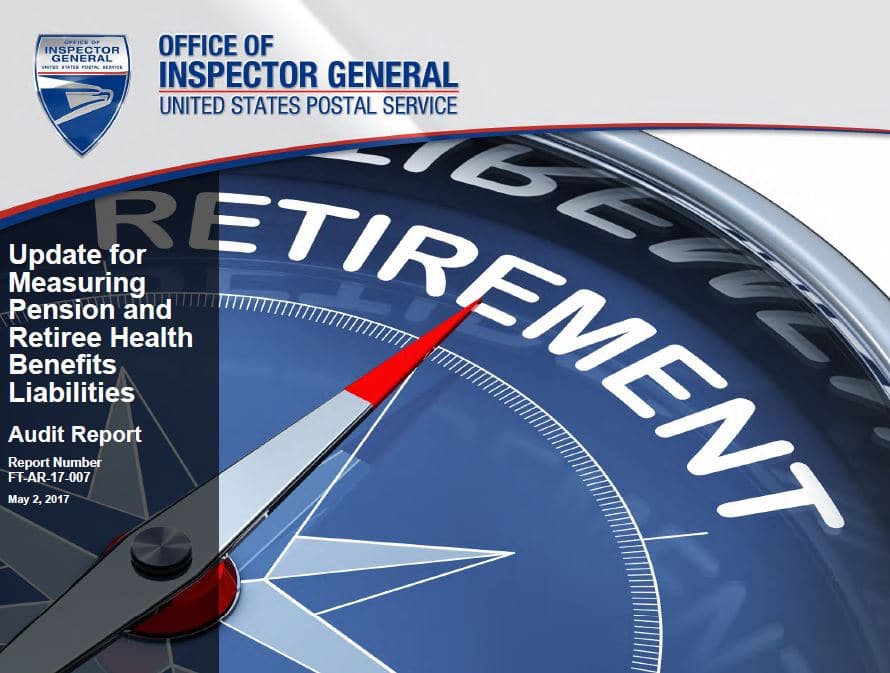 The Postal Service’s financial challenges are well publicized. From FY 2007 to FY 2016, it lost $62.4 billion, with $54.8 billion of that total related to prefunding retiree health care. Furthermore, the Postal Service believes it is unlikely to make all legally required payments in FY 2017, based on availability of cash and its inability to borrow.

In an effort to reduce the retiree health benefits liability, the Postal Service has made proposals which have been incorporated into pending legislation that included mandatory enrollment in Medicare by Postal Service retirees in order to participate in the Federal Employees Health Benefits program. Since 1983, the Postal Service and its employees have contributed over $29 billion to Medicare. The proposals also include savings with respect to prescription drug benefits under Medicare.

As of the end of FY 2016, the OPM projected the Postal Service’s share of assets in the CSRS at $174.4 billion and the liability at $191.9 billion. For the FERS, OPM projected $112.1 billion in assets and a $115.9 billion liability. As of the end of FY 2016, assets in the Postal Service Retiree Health Benefits Fund were $51.9 billion, and the OPM calculated the retiree health benefits liability at $104.0 billion. The assets in these retirement liability accounts totaled $338.4 billion, and the liabilities totaled $411.8 billion, resulting in these liabilities funded at 82.2 percent.

Our objective was to update and assess the impact of changes in assumptions on Postal Service retirement liabilities, in order to evaluate the reasons for the significant reduction in its pension funding position, and to update results produced through use of Postal Service specific assumptions.

This report updates three reports the Office of Inspector General previously issued in FY 2013 regarding Postal Service-specific assumptions and their effect on the CSRS, FERS, and retiree health benefits liabilities.

Between FY 2010 and FY 2014, the funded status of the CSRS and FERS pension plans changed from a surplus to a deficit primarily due to changes in assumptions for the interest rate and the cost of living allowances, and lower than expected investment returns on pension plan assets.

Although the monetary impact associated with these issues is not in the direct control of Postal Service management, we recommended management continue to work with Congress to enact legislation requiring the OPM to use Postal Service assumptions in preparing pension and retiree health benefits liabilities and Medicare participation.

Since the Office of Legal Counsel will determine when the Postal Service should make its first payment for the unfunded CSRS liability, we are not making a recommendation.