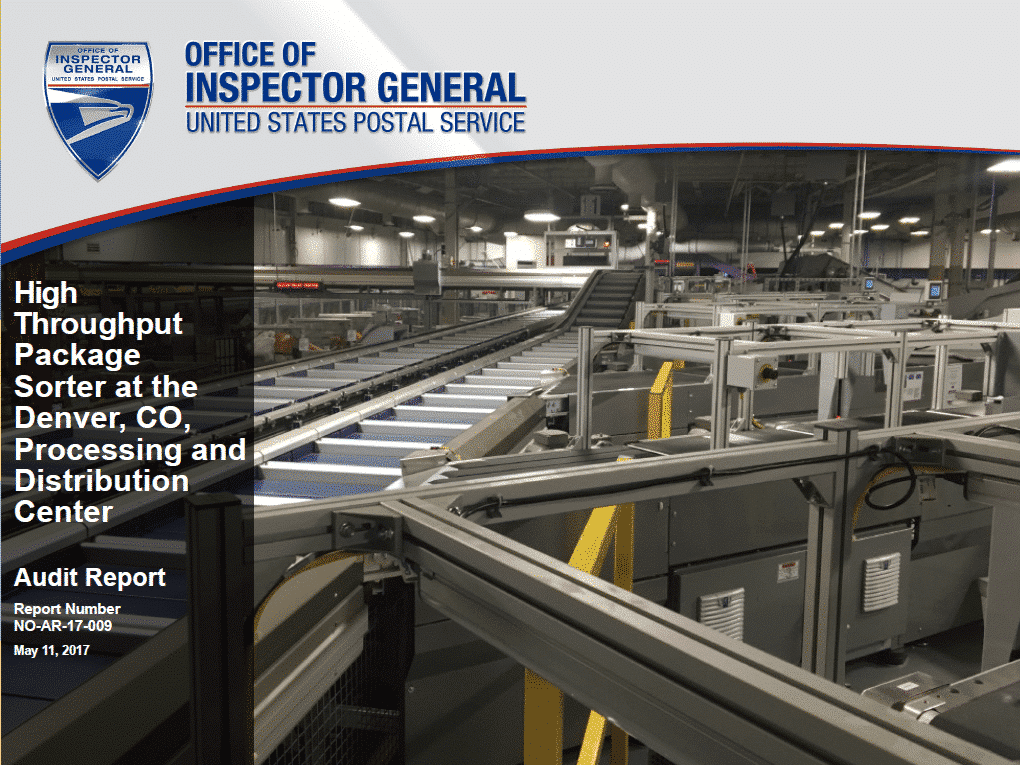 In October 2015, the U.S. Postal Service approved the purchase of a single pilot High Throughput Package Sorter (HTPS) machine for about $17 million for evaluation at the Denver, CO, Processing and Distribution Center (P&DC). This machine was designed to process more packages about twice as fast as current package sorters. The HTPS is projected to increase automated package processing efficiency and decrease costs. The Denver P&DC’s HTPS machine became fully operational in October 2016.

The HTPS program is part of the Postal Service’s Five-Year Strategic Plan – Fiscal Years 2017 to 2021 to build a world-class package platform to meet evolving customer needs. The Postal Service projects deploying up to thirty HTPS machines at P&DCs nationwide with high package volumes.

Our objective was to evaluate the performance and functionality of the HTPS at the Denver P&DC.

The machine exceeded the 17,162 average daily packages processed goal by 108,048 pieces, or 630 percent. However, the Postal Service based its projected goal on the manual package volume transferred from the Denver Mail Processing Annex and not on all of the packages available to be processed on the HTPS. Therefore, we concluded that throughput and productivity are more applicable measures of HTPS performance.

The HTPS was not meeting the throughput goal because Denver P&DC management ran the machine about 14 hours a day instead of nine hours a day as projected. During our site visit in November 2016, we saw employees using as few as one of 14 feeding stations and not fully utilizing the machine’s capacity. The Denver P&DC Senior Plant Manager said the main goal was to process as many packages as possible throughout the day.

In addition, the HTPS project manager, Engineering Systems, provided reports showing that about 82,000 packages a day had to wait to feed into the machine because about 24 percent of the machine’s trays were occupied with recirculating packages. When the HTPS cannot read a package barcode or address, an image is sent to a Postal Service Remote Encoding Center for ZIP Code™ sorting information. Packages can recirculate on the HTPS up to three times before being resolved or rejected. As package recirculations increase, package processing space and HTPS throughput are reduced.

In an attempt to reduce rejected packages, Denver P&DC maintenance personnel replaced components that track package sorting information on the machine. The percentage of rejected packages did not improve. In early February 2017, the Postal Service took additional actions, including installing a keying station and software designed to improve the reading of barcodes and addresses. The Postal Service also scheduled a software release for summer 2017 to provide maintenance personnel with better visibility of Remote Encoding Center connectivity problems. We plan to evaluate the effectiveness of these actions in a future audit.

The HTPS was not meeting the productivity requirement, in part, because more than the projected 30 employees staffed the machine. Denver P&DC management told us that about 44 employees, or about 47 percent more than projected, are needed on one of the two shifts based on their experience with the machine. Increased staffing reduces operational savings. Another cause for lower productivity was employees charging their workhours to the HTPS machine operation when manually sorting HTPS rejected packages when they should have been charging their hours to a manual operation number. On December 21, 2016, over 100 employees charged workhours to the HTPS operation at the same time. This is about 70 more than the projected 30 employees, or 233 percent more employees. The senior plant manager said she would correct the issue by determining the proper operation number; however, as of March 1, 2017, seven of the 12 employees manually processing mail were charging a machine operation number.

Correcting the causes for low throughput and productivity at the Denver P&DC and preventing them at future HTPS sites will help reduce costs, increase operational savings, and better support the Postal Service’s strategic plan to build a world-class package platform. We calculated that the lower than expected throughput and use of 14 additional employees to run the machine per tour would cost the Postal Service about $3.15 million from October 15, 2016, through May 26, 2017.