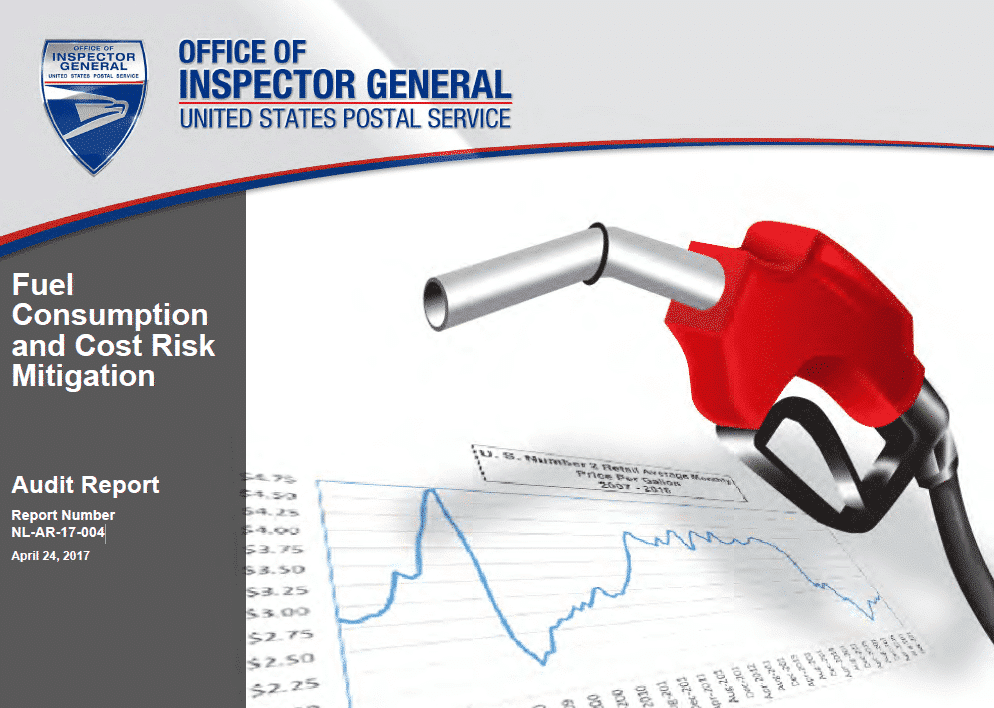 The U.S. Postal Service has a surface transportation network that, in fiscal year (FY) 2016, consisted of almost 16,000 supplier-operated highway contract routes (HCR) and about 7,600 Postal Service-owned mail transport vehicles. This fleet makes USPS one of the largest users of diesel fuel in the U.S., purchasing about 251 million gallons in FY 2016 at a cost of more than $570 million.

Unanticipated events domestically and globally, including natural disasters, disruptions of or reductions in fuel supply, and increased taxes can significantly affect fuel prices. Diesel fuel has been an extremely unstable cost for businesses to manage.

Our objective was to determine whether the Postal Service is positioned to mitigate the risks associated with increased fuel consumption and projected diesel fuel cost increases.

We found the Postal Service is not financially or contractually positioned to mitigate risks of increasing diesel fuel prices or consumption.

Despite declines in diesel fuel costs and mail volume, HCR miles and costs continue to increase. Specifically, between FYs 2013 and 2016, mail volume declined by 4.3 billion pieces and surface transportation fuel costs decreased by over $410 million. However, HCR miles increased by 183 million and HCR costs (excluding fuel) increased by $797 million. The Postal Service has identified multiple reasons for the increase in HCR costs and miles to include growth in package volume and changes in service standards. This substantial increase in HCR mileage subjects the Postal Service to major financial exposure if diesel fuel prices increase.

The Postal Service does not have a comprehensive strategic plan to address the risk of increasing diesel fuel prices. However, it has taken some interim steps to reduce risk by using fuel efficiency as best value criteria, requiring a sustainability clause in HCR contracts from FY 2016 forward, and encouraging suppliers to convert vehicles to alternative fuels.

In FY 2008, the Postal Service established a goal of reducing HCR diesel fuel use by 20 percent by 2020. It is not currently on target toward meeting this goal, having achieved only a 0.1 percent reduction as of FY 2015.

Management continues to work with HCR suppliers to promote the use of alternative fuels, specifically compressed natural gas (CNG). In 2015 and 2016, HCR suppliers converted about 178 vehicles to alternative fuel without Postal Service incentives. An incentive plan could include such things as sharing CNG conversion costs or a tiered pricing strategy based on fuel type and miles per gallon.

The U.S. Department of Energy projects a diesel fuel cost increase of $0.74 per gallon over the next five years from an average price of $2.63 in 2017 to $3.37 in 2022. Based on these projections, fuel costs for HCRs will increase by $600 million over the next five calendar years. With effective strategic planning, the Postal Service has an opportunity to put about $80 million to better use annually in calendar years 2018 and 2019.

We recommended management develop a comprehensive plan to mitigate the risk of projected fuel price increases. This plan could include the following: