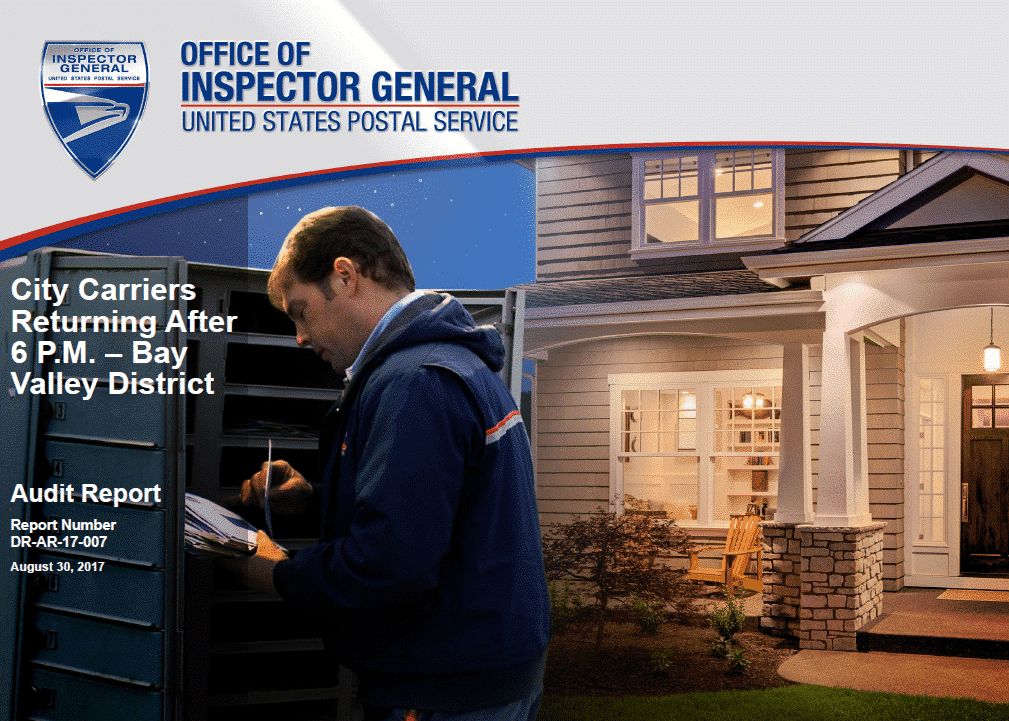 Strong consumer demand for goods purchased over the Internet has driven growth in the package market despite otherwise declining mail volume. This growing package segment provides the U.S. Postal Service an opportunity to expand services and increase revenue.

With this growth, city carriers and non-career city carrier assistants (CCA) are now delivering more packages and fewer letters to more addresses each year. To accommodate these changes, the Postal Service must adapt to this changing mail mix while maintaining service and efficiency.

The Bay Valley District’s package volume increased from 86.8 million in calendar year (CY) 2015 to 101 million in CY 2016, an increase of 16.3 percent. This growth is a direct result of eCommerce, Sunday package delivery, and grocery delivery services. In some areas, package deliveries now regularly occur early in the morning and sometimes as late as 10 p.m.

The Postal Service’s goal is for 95 percent of city letter carriers to return from street operations before 5 p.m. and 100 percent by 6 p.m. Carriers returning to their units on time helps the Postal Service meet its operational goals. In CY 2016, Bay Valley District city carriers and CCAs delivered about 2.2 billion mail pieces and 40 million packages to nearly 2 million delivery points on 3,288 routes. City carriers and CCAs returning after 6 p.m. in the Bay Valley District increased by 81 percent in CY 2016. We selected the Bay Valley District for review because it has the fourth highest percentage of instances of carriers returning after 6 p.m. in the nation.

Our objective was to evaluate city carriers returning to the office after 6 p.m. in the Bay Valley District.

Our visits to 15 randomly selected delivery units disclosed that only 72 percent of city carriers and CCAs in these units returned by 6 p.m. with some on the street as late as 10 p.m.

City carriers and CCAs returning to delivery units after 6 p.m. increased the district’s overtime and penalty overtime workhour costs. The Bay Valley District’s use of additional workhours after 6:00 p.m. resulted in about $15.2 million in questioned costs annually. Improving staffing and adjusting routes and mail flow could eliminate excess workhours after 6:00 p.m., and help the district realize a cost avoidance averaging $30.9 million annually.