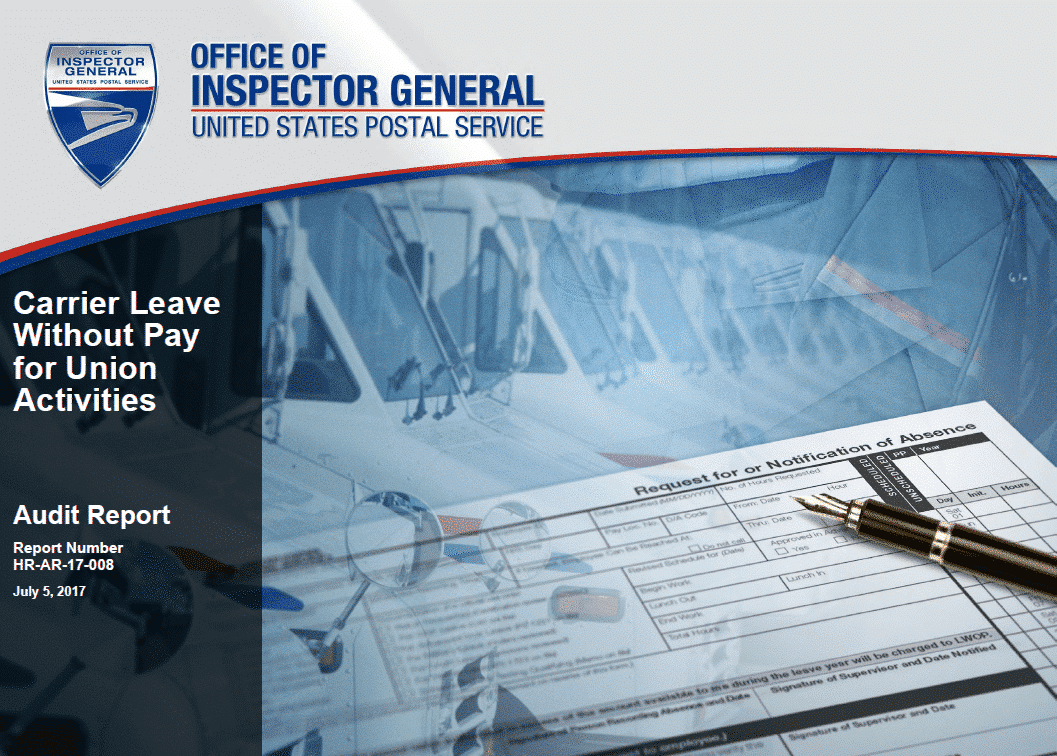 In late November 2016, Senator Ron Johnson of Wisconsin requested the U.S. Postal Service Office of Inspector General (OIG) review a constituent’s allegation that a select group of postal carriers took leave without pay (LWOP) to participate in union political activities. This report responds to the senator’s request and reviews the use of overtime to cover Postal Service carriers who took LWOP to support union political activities during the election season. Our Office of Investigations in conjunction with the Office of Special Counsel conducted a separate investigation of potential Hatch Act violations.

Our objectives were to determine the impact on local delivery routes and applicable facilities of 97 union-identified carriers who took LWOP in support of union political activities and how these carriers were paid. We selected a sample of 22 of the 97 carriers assigned to different facilities covering all seven Postal Service areas. We also evaluated how the leave was approved and by whom.

From September through November 2016, the Postal Service granted LWOP to the 97 carriers for periods ranging from four to 50 days to participate in political activities on behalf of the union. The total cumulative amount of LWOP taken by these carriers was about 2,776 days during this period. These carriers were located in 92 facilities nationwide.

Seventy-eight percent of the facilities (72 of 92) were in six political battleground states where the National Association of Letter Carriers endorsed specific candidates. About 82 percent of the total LWOP for these carriers (2,264 of the 2,776 cumulative days) was used in these six states.

Postal Service policy states, “the granting of LWOP is a matter of administrative discretion. Each request for LWOP is examined closely, and a decision is made based on the needs of the employee, the needs of the Postal Service, and the cost to the Postal Service. Installation heads may approve requests for LWOP that are not in excess of one year. Employees who are to be on leave without pay for union official reasons must initiate a PS Form 3971, Request for Notification for Absence, for supervisor approval.” However, in relation to these specific requests, supervisors received correspondence to grant LWOP to employees even though concerns were raised regarding local operational impact.

In some cases supervisors initially denied the leave, but higher level managers in the district overruled them. In other cases supervisors contacted Labor Relations officials who told them to approve the leave. Finally, other managers granted these requests when provided emails or texts from union leadership or postal management validating this as a union activity or based on their prior knowledge of similar union activities.

Several factors contributed to supervisors approving LWOP even though operational concerns were raised:

While on LWOP, carriers were paid by the National Association of Letter Carriers, which was subsequently reimbursed by its Letter Carrier Political Fund, in accordance with federal Election Commission regulations.

As a result, at the 22 postal facilities we reviewed, the Postal Service incurred net overtime costs of $90,682 due to carriers taking extended LWOP. In some instances, assigning city carrier assistants who are paid at a lower rate to cover carriers who took LWOP resulted in a savings; however, these city carrier assistants were not available to cover other overtime assignments at these 22 facilities.

We recommended management adhere to the Postal Service policy to assess operational needs prior to granting or denying LWOP for union activities and communicate deviations to appropriate Operations and Labor Relations personnel; and establish communications protocol that allows Labor Relations and Operations personnel to coordinate employee participation in union initiatives.