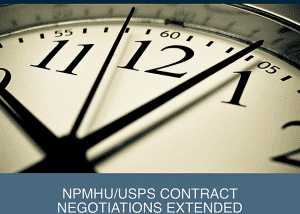 May 21, 2016 — The NPMHU and USPS bargaining teams have been engaged in contract negotiations since late February 2016 in an effort to reach agreement on the terms of their 2016 National Agreement. Contract talks between the parties continued well into the night on Friday, May 20, 2016 as the 2011 National Agreement was set to expire at midnight. While significant progress has been achieved, the parties have nevertheless been unable to finalize a full and complete successor contract. The parties have therefore agreed to extend bargaining over several key issues, with the hope of eventually reaching a full agreement. If and when a tentative successor agreement is reached, its terms will be distributed to the NPMHU membership for review and ratification. More details will be shared and discussed at a meeting of all Local Presidents scheduled for Tuesday, May 24.