Tuesday’s election defied expectations and set historical precedents. The results were disappointing, but we recognize democracy in action, and look for ways to move forward.

In August at our National Convention, the delegates endorsed Secretary of State Hillary Clinton for President. Not only was she on the side of labor, but she was also a friend to the Postal Service. A Clinton administration and a Democratic majority in the Senate would have increased our chances at passing a comprehensive bill on postal reform, and would have protected the benefit programs of all federal and postal employees.

That said, the fight for postal reform and the need to protect our legislated benefits are far from over. We congratulate President-elect Donald Trump on his hard earned victory, and plan to work with his administration and the newly elected Congress on these issues.

The election’s results are not without consequence, but it is important to remember that we have friends on both sides of the aisle. A strong and vibrant Postal Service should be a nonpartisan issue, in the interest of all Americans – Democrats, Republicans, and Independents alike. Our bipartisan bill should inspire confidence that our Union and our Postal Service will prevail. 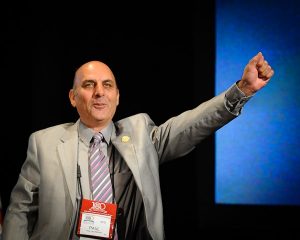 I’d like to thank all NPMHU members who expended time and energy campaigning for our favored candidates. Regardless of the outcome, let it be known that your hard work and dedication does not go unappreciated.

In the face of uncertainty, we can always look to our Union as a source of strength. Without exception, solidarity results in perseverance. Through good times and bad, we know we can always rely on each other. As the newly elected National Executive Board plans for the future, all Mail Handlers should know that they are not alone in our ongoing efforts. It’s the power of you – and all of those around you – that will bring us closer to achieving our goals.