The Trump Administration issued an Executive Order creating a task force charged with evaluating the operations and finances of the U.S. Postal Service, covering topics like pricing, USPS policies, and workforce costs. Specifically, the Task Force is being chaired by the Secretary of the Treasury or his designee, and other members include the Director of the Office of Management and Budget (OMB), the Director of the Office of Personnel Management (OPM), and any other department or agency head the Chair may designate. 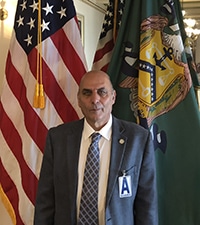 National President Paul Hogrogian and National Secretary-Treasurer Tim Dwyer, were invited to the Treasury Building on May 15, 2018 to meet with representatives of the Task Force. In attendance were a host of government officials designated not only by the Treasury Department, but also by OMB and OPM. The “listening session,” as the Task Force described it, was led by Kipp Kranbuhl, Deputy Assistant Secretary of the Treasury for Small Business, Community Development & Housing Policy, and Clay Berry, Deputy Assistant Secretary of the Treasury for the Office of Financial Markets.

Hogrogian and Dwyer led the conversation, starting with a description of mail handlers, their work, and their contribution to the Postal Service. Because the NPMHU was the first outside stakeholder invited to meet with the Task Force, the Union also provided a short overview of USPS finances and its network operations since enactment of the PAEA in 2006, through the Great Recession of 2008, and in relation to the recent electronic diversion of mail volume. There also were discussions relating to ongoing legislative efforts at postal reform, the need to reject additional enforcement of pre-funding for retiree health or pension costs, the use of USPS assumptions in calculating unfunded liabilities, and the intrinsic value attributable to the existing USPS monopolies, the network infrastructure maintained by the Postal Service, and the need for continuing universal service.

Once the evaluation is completed, the Task Force is supposed to develop recommendations on administrative and legislative reforms for the Postal Service. Only time will tell whether this Task Force is able to stimulate appropriate reform, or whether its written report provides just another addition to the landfill of prior reports that were essentially pointless and therefore correctly ignored.