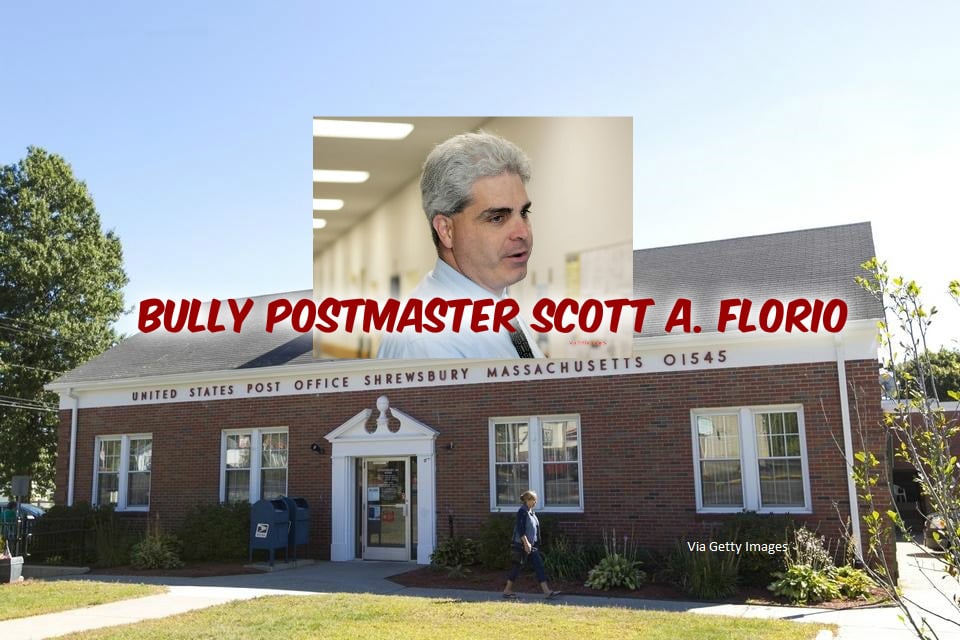 SHREWSBURY – Shrewsbury Post Office employees have taken a vote of no confidence in their postmaster whom they say has created “a hostile work environment filled with harassment and bullying,” a repeat of what postal workers in other towns where he has worked have said in the past.

The local postal workers say they work through breaks and lunch to do the work of other employees because staff is short to save money, and to make Postmaster Scott A. Florio‘s required performance and route-delivery numbers look good to higher-ups in Boston. If someone tells Mr. Florio that something isn’t right or files a grievance, he retaliates against them and yells at them in front of other workers, some said.

Peter D’Errico, a Shrewsbury resident and union shop steward in Shrewsbury, last week said workers don’t feel safe and fear for their jobs and their health. During the six years Mr. Florio has been postmaster, he said, employee turnover rate has been unusually high. Most of the 40 employees who have left resigned, he said.

Mr. D’Errico and the other workers who signed the no-confidence memo said “an extensive number of grievances have been filed against Mr. Florio and his office safety record is atrocious.” They said he consistently under staffs to save money and requires employees to work extra hours.

Mr. D’Errico said the no-confidence document was sent to Mr. Florio’s supervisors in Boston in September. Currently, 51 people work in the Shrewsbury Post Office, sorting and delivering mail to more than 15,000 households and businesses and more than 900 post office boxes. 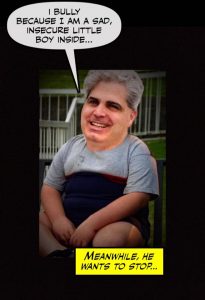 “The morale and treatment of employees and customers have reached an all-time low and is keeping with the trademark abuse and harassment he has exhibited at his previous assignments in Leominster and Auburn. Despite being allegedly removed for cause from those offices, he has been given numerous chances to continue this pattern of abuse and poor customer service,” the no-confidence document signed by three dozen workers reads. “… Mr. Florio is a rogue and toxic manager and should be removed from supervisory duties, if not from the post office entirely.”

Reached by phone last week, Mr. Florio, a Boylston resident who is in his mid-40s, denied allegations of bullying, harassment and other mistreatment of employees.

“I’m a nice person. I’m not sure where they got that from,” he said before referring a reporter to the media relations person in the Boston office.

“However, the Postal Service does expect all of our employees to treat each other, our customers and the public at large with dignity and respect. As for the mobility of our employees, it is not uncommon for postal employees to work at various facilities throughout their careers,” Mr. Doherty wrote.

Mr. D’Errico said workers’ health and safety have suffered because of the hostile and stressful work environment. He said several employees have taken off from work because of the stress. Recently, a veteran employee was verbally abused by Mr. Florio when he learned the man was filing a grievance. The next day, the worker who was in his 40s, had a heart attack on the job. When he returned to work, he sought a transfer to a post office in another community. But Mr. Florio allegedly persuaded the postmaster in that community not to accept the transfer request.

Another worker, a clerk, was fired before his 90-day probation period was up. After union representatives complained, Mr. Florio rehired the worker but allegedly assigned him to custodial duties, said Mr. D’Errico.

Hector Ramos, 28, team captain of the clerks, said while the rehired clerk is assigned to cleaning toilets, he has to pick up his work.

“He (Mr. Florio) just didn’t like the guy, period,” said Mr. Ramos. “He was never given any training. He (Mr. Florio) doesn’t want people to know things. The less you know, the more control … the more power he has over you.”

After working at the Shrewsbury post office for six years, Mr. Ramos is in the process of transferring to the nearby Central Massachusetts Mail Processing and Distribution Center.

“I was working six days a week … no lunch or breaks. I was paid for the time, but I was starving,” said Mr. Ramos. He said Mr. Florios’ only concern is performance quotas.

Jennifer Lamar of Worcester, who began working part time at the post office’s carrier annex at 194 Main St. in October 2015, said she cleared her 90-day probation evaluation in 60 days. But she resigned in August after she said her health was being affected by the harassment and stress. She said she frequently asked for a policy handbook and was told there isn’t one and that the Shrewsbury office does things differently. After she injured an arm throwing parcels at work at Christmas time, she said Mr. Florio simply told her to use her other arm.

She said there were times when she was not paid correctly for the number of hours she worked. At one point, she was working as a supervisor on Sundays, which is a level-17 pay position. However, she was paid level-6 pay. She was told by Mr. Florio that she would be converted to the higher pay level, but that never happened. When she refused to use her own vehicle on the job because no one else was asked to, she said Mr. Florio reduced her work hours from more than 50 a week to four, the maximum guaranteed for a postal support employee.

Ms. Lamar said seven months after working with Mr. Florio, the unpleasant work environment and the long work hours left her so stressed that she could not work. When she called Mr. Florio and told him, he told her to get a doctor’s note. Her doctor saw her condition and removed her from work for three days. Ms. Lamar said when she returned to work and presented Mr. Florio with the doctor’s note, he stormed out of his office and yelled, “This is unacceptable,” and returned to his office.

The following month, when she refused to speak to Mr. Florio without union representation out of fear of her words being used against her, he yelled at her to “get over here. I’m your boss. Not John,” referring to John H. Flattery, president of the American Postal Workers Union AFL-CIO Local 4553. As she continued to help customers, Mr. Florio allegedly walked up behind Ms. Lamar and told her to sign off and call (the union representative) on her own time. She said Mr. Florio continued to yell at her as she packed her cash drawer to leave.

In June, Ms. Lamar filed a complaint with the Attorney General’s Fair Labor Division. She got a letter from the office saying she could sue civilly.

Some letter carriers said Mr. Florio rearrange routes to make their jobs more difficult. When changes are made, letter carriers are required to quickly learn the new routes.

Paul Loiseau, 74, and his son, Shawn Loiseau, owners of American Nutrition Center at 149 Boston Turnkpike, said they had big problems when mail delivery and pickup times changed from morning to late afternoon for Route 9 customers.

With the early-morning service that was routine for years, they were able to mail items to customers the same day of their requests. Customers were unhappy when that stopped, said Shawn Loiseau, a former player with the Indianapolis Colts. Paul Loiseau said he called and finally wrote a letter to Mr. Florio complaining about the change and asking that the service go back to the way it was. Several months later, it did.

“I told him, why change something that’s working,” the elder Loiseau, a lifelong resident of the town, said. “We’ve never had a problem like that with a postmaster. I never saw anybody that was screwing up things like this.”