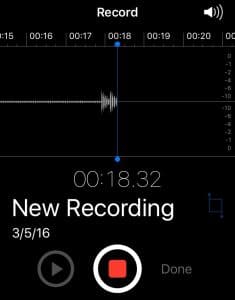 By Robert McTiernan – March 2, 2016
On December 24, 2015, employees who want to make video and audio recordings of co-workers and company meetings received a holiday gift. In Whole Foods Inc. and United Food and Commercial Workers, Local 919, the National Labor Relations Board (NLRB) determined that a blanket company policy prohibiting use of devices, such as cell phones and digital cameras, to record conversations and company meetings was illegal. In order “to encourage open communication, free exchange of ideas, spontaneous and honest dialogue in an atmosphere of trust,” Whole Foods announced a policy that recording conversations, phone calls, images or company meetings without the approval of top management or consent of all participants would result in discipline up to and including discharge.

The NLRB’s concern in Whole Foods was that its rule was too broad and would interfere with employee rights under Section 7 of the National Labor Relations Act to engage in “concerted activity.”

In general, the NLRB holds that ambiguous rules must be construed against the employer. The Labor Board expressed its concern that there was no overriding employer interest in stopping employees from, for example, “recording images of protected picketing, documenting unsafe workplace equipment or hazardous working conditions, documenting and publicizing discussions about terms and conditions of employment, documenting inconsistent application of company rules, or recording evidence for later use at administrative or judicial forums and employment-related actions.” The NLRB determined that “any act of recording by a single employee that forms part of or is undertaken in furtherance of a course of group action constitutes concerted activity within the meaning of Section 7,” and, therefore, is protected.

The exercise of the right to promote unions or work in concert with other employees to improve working conditions cannot be dependent on the employer’s permission or the consent of all parties to a conversation. For this reason, the rule at issue “would reasonably chill the employees in the exercise of their Section 7 rights.”

This ruling clearly resulted from the “broad and unqualified language of the rule,” which constituted a blanket prohibition of any audio or visual recording. The Board’s decision does not prevent narrowly drawn rules that are necessary to preserve an employer’s essential interests or the rights of third parties.

As an example, the NLRB cited its decision in Flagstaff Medical Center, a 2011 decision which was upheld by the United States Court of Appeals for the District of Columbia. In that case, the NLRB upheld a rule that prohibited the use of cameras for making recorded images in hospital settings, adopted to fulfill the employer’s obligation under HIPAA to protect patient health information.

It should also be noted that the Board decision does not necessarily overrule state criminal laws, for example, the Pennsylvania Crimes Code, that prohibit surreptitious audio recording of conversations.

In general, employers are wise to carefully tailor any work rules to protect some specific, compelling interest of the employer or its customers and which do not inadvertently infringe on employee rights.

This ruling will be good news for union sympathizers, who increasingly are using cell phones to record meetings opposing unionization held by employers. Although federal law gives employers broad discretion to state their opposition to unionization, the NLRB likely sees its decision in this case as an important check on employers from going beyond their right to express opposition to unionization and to outline the disadvantages of unions to resorting to threats or promises of benefits in order to defeat union activity.