Changes that took effect this week will not affect bulk or metered mail as much as first-class letters. 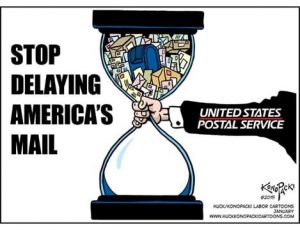 The U.S. Postal Service has announced new “lower standards for mail delivery” that will result in mail delivery taking longer to reach its destination. The new standards took effect Jan. 5, 2015.

In a press conference held at the National Press Club on Tuesday, Postmaster General and U.S. Postal Service chief executive Patrick Donahoe said that the new regulations and other Postal Service changes will not affect bulk or metered mail as much as single, stamped first-class letters.That may mean that collectors waiting for reply or payment via mail will have to wait longer.

Donahoe did not indicate how much longer return mail may take. However, he did say that thanks to technology as much as 30 percent of first-class mail is still “delivered overnight,” and that the new lower standards and consolidation would create delivery times that vary by city or region.

Donahoe has led the Postal Service since 2011 and has announced that he will retire on Feb. 1. During his four-year tenure, Donahoe oversaw a major restructure of the Postal Service in the wake of a dramatic decline in volume of first-class mail. Megan Brennan, the current Postal Service chief operating officer, has been named his successor.