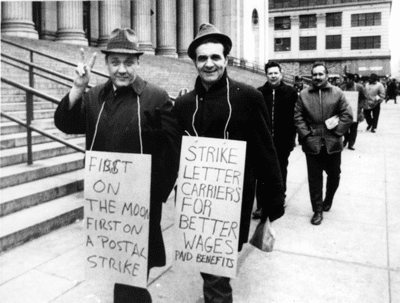 From March 18, 1970: Manhattan letter carriers walk a picket line as Post Office Department officials suspend mail service to and from New York City in the wake of the first postal strike in U.S. history. (UPI Telephoto)

Letter carriers who were involved in the Great Postal Strike, which began 45 years ago on March 18, 1970, are telling their stories for a new book about the walkout.

The book is being written by Philip Rubio, an associate professor of history at North Carolina A&T State University in Greensboro and author of There’s Always Work at the Post Office: African American Postal Workers and the Fight for Jobs, Justice, and Equality. He conducted interviews last year at the NALC National Convention in Philadelphia.

“I am collecting as many oral histories of 1970 postal strike veterans as I can,” Rubio said. The book will examine the United States Postal Service from the 1970 strike and its immediate aftermath to the current financial crisis. While he had interviewed many strike participants for his previous book, including NALC President Emeritus Vincent Sombrotto, he interviewed an additional 55 people in Philadelphia and hopes to speak to more as he works on the book.

The picture the interviews paint is one of a rich tapestry, with differing opinions and experiences.

“Carriers told me of strike debates and votes held in union halls, bars, swing rooms, or even on the workroom floor,” he said. “Some of these debates and votes started in the weeks preceding the strike, while others happened spontaneously.

“Once the strike started, some local union officers would have to ‘disappear’ to avoid being served with court injunctions. Real rank-and-file leadership was being exercised by those who often had little or no experience in daily union affairs, and whose only communication was telephone, word of mouth, or news reports.”

While much of the attention was on the New York City strikers, carriers throughout the country were engaged in the movement.

“Participants frequently told how they felt they owed it to New York strikers to not leave them stranded,” Rubio said.

One interesting interview came from someone who wasn’t even a carrier during the strike, but instead was one of the troops President Richard Nixon called up to try to move the mail in New York during the strike.

“After he retired from the military, he went to work as a letter carrier and became an NALC member,” Rubio said.

After the book is completed, Rubio intends to house the oral histories at the Duke University archives in Durham, NC, where the interviews he conducted for his previous book are housed. Anyone with a historical interest will be able to access them.

For those who wish to get in touch with Rubio about his work or to share a story with him, please e-mail The Postal Record at postalrecord@nalc.org or call 202-662-2480.

Read more about the Great Postal Strike in Carriers in a Common Cause.

This story originally ran in the March 2015 Postal Record.