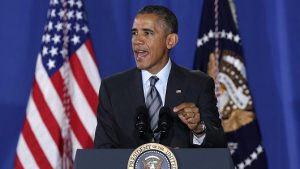 Feb. 2, 2015—Today, the Obama administration introduced its $4 trillion budget proposal for the federal government in Fiscal Year 2016, which begins on Oct. 1, 2015. The proposal outlines the president’s spending and tax priorities for the next fiscal year, as well as reform proposals for agencies such as the U.S. Postal Service.

Congress is not bound in any way by the president’s budget. The document serves as the starting point for a months-long debate in Congress, with the House and Senate budget committees taking the lead. None of the budget proposals announced today will become law until approved by Congress and signed by the president.

Although we are encouraged that the new budget again mandates the continuation of six-day mail delivery in FY 2016, we are deeply disappointed that its postal reform section still embraces the outdated and misguided postal policies of former Postmaster General Patrick Donahoe. We are also disappointed that it fails to reflect the progress made during the last Congress toward a consensus approach to postal reform—a consensus embraced by the postal unions, major mailers and key legislators in both parties.

The new budget, which was put together over Donahoe’s final months in office (his tenure ended on Jan. 31), still embraces a doomed business strategy devised in the midst of the Great Recession. It calls for an eventual shift to five-day mail delivery if annual mail volume falls below 140 billion pieces of mail, adopting a proposal from the deeply flawed S. 1486, a bill introduced in 2013 by Sens. Tom Carper (D-DE) and Tom Coburn (R-OK). This Saturday service cut was included even though the two senators agreed in December to drop it cut from the final version of their bill.

While this year’s budget proposal regarding Saturday delivery might seem like progress (since last year’s budget called for its immediate end), it is still misguided. In recent years, the Postal Service has seen a strong financial recovery and rising revenues, even as mail volume has declined modestly, thanks to an e-commerce boom, a stronger economic recovery and growing letter mail revenues.

The NALC will urge congressional leaders to reject the administration’s outdated and misguided proposals to reduce delivery services, both the proposal to trigger an end to Saturday delivery if mail volume falls below 140 billion pieces (in 2018, under current USPS estimates) and another proposal to allow “USPS to begin shifting to centralized and curbline delivery….”

The administration’s new budget also fails to reflect the progress made toward fixing the retiree health pre-funding mandate. This progress was evident in both S. 1486 and the consensus reform approach developed by the postal unions and major mailer organizations last year.

As the new Congress gets down to business, the NALC is committed to working on comprehensive postal reform that reflects the new reality the Postal Service faces and that captures the support of all major stakeholders. We are hopeful that new Postmaster General Megan Brennan will embrace consensus reforms and will encourage both the administration and Congress to focus on ways to build on our recent success and to pave the way toward a future of innovation and growth.

In the days ahead, NALC’s government affairs and research staff will review and analyze all of the budget proposals affecting active and retired letter carriers. We will support those that strengthen the Postal Service, and we will vigorously oppose those that would damage USPS or harm the interests of NALC members.