NALC: If oil prices stay where they are (or go lower), they will boost USPS – 21st Century Postal Worker
Share
Tweet
Email

Jan 26, 2015
As letter carriers are well aware, the price at the gas pump has fallen significantly over the last couple of months.

As of Jan. 19, the average price for gasoline in the United States was $2.07 a gallon for regular unleaded gasoline. In some parts of the country, gas is now down below $2 a gallon. 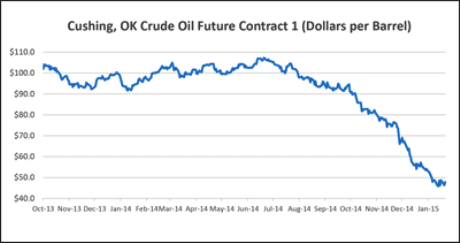 Retail gasoline prices have been driven down by falling oil prices. The price of one of the most frequently cited oil prices, West Texas Intermediate (or WTI for short), is now around $47 a barrel, down from $100 a barrel last summer. (See the above chart.)

If you are interested in the relationship between the price of oil and gasoline prices, the U.S. Energy Information Administration has some really interesting analysis here.

In addition to reducing the amount of money we spend to fill up our personal vehicles, the drop in oil prices is expected to boost the bottom line of companies that are in the transportation industry. For most of the Postal Service’s Fiscal Year 2014, oil prices were in the range of $90 to $100 a barrel. In FY 2015, prices have averaged around $70/barrel.

With 211,000 motor vehicles (for delivery, transportation and other purposes), with expenses for heating oil, and with contracts for air mail, fuel expenses are a material part of USPS operating costs. So a sizeable decrease in the price of oil should translate into a positive impact on the Postal Service’s finances.

How much of an impact? It’s difficult to calculate exactly, but it could be significant.

via If oil prices stay where they are (or go lower), they will boost USPS | National Association of Letter Carriers AFL-CIO.