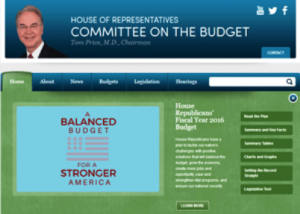 The federal spending plan for Fiscal Year 2016 released by the House of Representatives on Tuesday once again aims to cut letter carriers’ pay.

The FY2016 budget measure, released by the House Budget Committee, calls for requiring all federal employees to pay more out of their own pockets toward their retirement benefits.

While the House bill doesn’t say exactly how much of a pay cut its authors are looking for, it does refer to the recommendations of President Barack Obama’s 2010 National Commission on Fiscal Responsibility and Reform, which concluded that the government and its employees should share equally in paying for pension benefits. The commission is more commonly known as the Simpson-Bowles Commission, named after its appointed chairmen: former Sen. Alan Simpson (R-WY) and Erskine Bowles, a former chief of staff to President Bill Clinton.

“The Simpson-Bowles plan calls for all federal worker contributions—under both CSRS and FERS—to go up to 6 percent,” NALC President Fredric Rolando said. “In other words, they want 6 percent of your pay to go toward your pensions, with no accompanying increase in your pension benefits.”

Under this plan, for example, a top step letter carrier (Step O) would see an annual reduction in pay of more than $3,500.

“The Postal Service doesn’t take a dime of taxpayer money,” Rolando said. “So including letter carriers and all postal workers in this wholly unfair plan, especially under the guise of ‘deficit reduction,’ makes no sense at all.

“Over the last several years, federal workers’ compensation has seen cuts amounting to $159 billion,” he said. “And postal pension accounts are almost fully funded right now, paid for through the sale of postage and postal products, not by the taxes that fund the compensation of the rest of the federal workforce.

“It’s time for all of us to tell Congress that enough is enough,” Rolando said.

The House plan is the first step in what will be a months-long budget process; Fiscal Year 2016 doesn’t start until Oct. 1.

Meanwhile, the Senate version is expected to be released today.