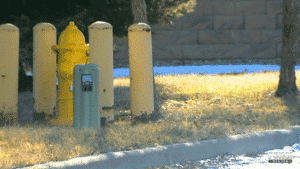 By Chris Halsne – March 11, 2015
DENVER — Within an hour of FOX31 Denver discovering a hidden camera, which was positioned to capture and record the license plates and facial features of customers leaving a Golden Post Office, the device was ripped from the ground and disappeared. FOX31 Denver investigative reporter Chris Halsne confirmed the hidden camera and recorder is owned and operated by the United State Postal Inspection Service, the law enforcement branch of the U.S. Postal Service.

The recording device appeared to be tripped by any vehicle leaving the property on Johnson Road, but the lens was not positioned to capture images of the front door, employee entrance, or loading dock areas of the post office. 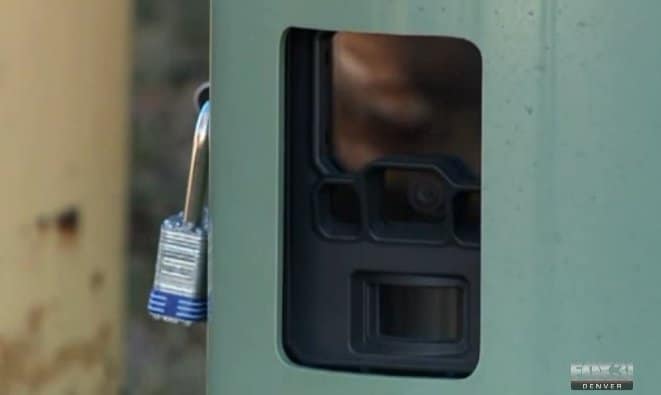 An alert customer first noticed the data collection device, hidden inside a utilities box, around Thanksgiving 2014. It stayed in place, taking photos through the busy Christmas holidays and into mid-January.

Managers inside the post office tell FOX31 Denver they were unaware customers were being photographed outside and that the surveillance was not part of the building’s security monitoring.

A spokesperson for Postal Inspection Service declined to address the specific reason for the domestic surveillance, but admitted the agency had a “number of cameras at their disposal.”

Pamela Durkee, a Federal Law Enforcement Agent and U.S. Postal Inspector, sent an email to FOX31 Denver explaining, “(We) do not engage in routine or random surveillance. Cameras are deployed for law enforcement or security purposes, which may include the security of our facilities, the safety of our customers and employees, or for criminal investigations. Employees of the Postal Inspection Service are sworn to uphold the United States Constitution, including protecting the privacy of the American public.”

FOX31 Denver reviewed criminal search warrants on file in city, county, and federal court but none appeared to be related to the Golden post office camera set-up. The Postal Inspection Service would not confirm or deny that the camera was collecting data for a specific case or cases.

Lee Tien, an attorney for the San Francisco-based Electronic Frontier Foundation, says more and more federal agencies are getting away with conducting surveillance and collecting personal data of citizens without a warrant signed by a judge.

“Part of being a responsible, constitutional government is explaining why it is doing surveillance on its citizens,” Lee told Halsne. “The government should not be collecting this kind of sensitive information. And it is sensitive! It`s about your relationships, your associations with other people, which can be friendship or political or religious. The idea that we give up that privacy simply because we use the U.S. mail is, I think, a silly idea.”

Lee says EFF has been fighting for greater government transparency when it comes to the way agencies like the FBI and the National Security Agency have been vacuuming up massive amounts of cell phone, email and license plates data and storing them in a central computer system.

Lee says, “The idea that they would be able to keep that information forever and search through it whenever they want to – that seems very, very wrong to us because it means you’ll be able to accumulate over time a lot of innocent peoples’ information and then use it in the kinds of ways that would not be overseen by any kind of court or independent third party.” 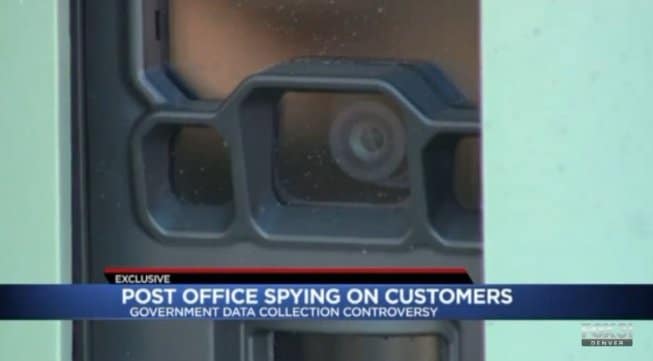 None of the agencies could provide a written data retention policy, which would detail how long USPIS could keep the images agents have been collecting from the Golden post office camera and other cameras around the Denver area. Similarly, there does not appear to be a policy regarding in what circumstances other federal agencies may have access to the personal information gathered from the cameras.

Our discovery of this camera program comes just months after the U.S. Postal Service was forced to reveal (during a Congressional hearing) that it was videotaping and storing the address and return information from billions of pieces of mail at its distribution centers.

A federal audit in 2014 found that the Post Office had “insufficient” controls in place when allowing law enforcement agencies access to the data collected from that “mail cover” program.

We did locate a California company which claims it sold the U.S. Postal Service “consumer surveillance systems,” which come installed with wireless data retrieval and infrared night capabilities.

Hop-On Incorporated did not return our repeated calls to elaborate on its self-proclaimed deal. Our FOIA requests for federal contracts and financial information about Hop-On and other contractors who sell USPS and USPIS camera equipment were returned to us void of all information.