This mailman went postal after the Cubs won the World Series. 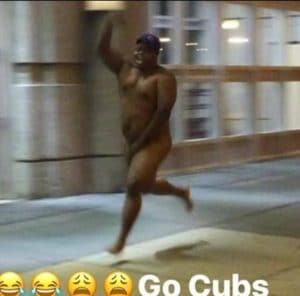 Corpulent Cubs booster DeAndre Barnes stripped down to nothing but his ballcap and joyously streaked in celebration of the Northsiders’ first World Series championship since 1908.

“Yeaaaaaaaaaaah baaaaaaaaaaaby the Chicago Cubs are the 2016 World Series champions. And this how I celebrate,” Barnes posted on Facebook and Instagram – along with a video of himself bounding up and down a block.

He pumped one arm, while using the other hand to hold onto his manhood during his celebration.

Barnes identified himself on Facebook as a Chicago resident and a USPS mail handler.