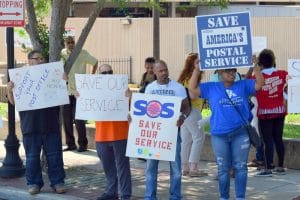 At one time the USPS was the mailer of choice. UPS and FEDEX were considered secondary, if they were mentioned at all. At one time we had ten thousand clerks. Things have changed since then. Automation has had a significant impact on our operations.

Rather than making an effort to account for this, management has cut operations. How many of you have had a manager tell you that “I run this place, not the Union?” I have. More than once!

Overnight Delivery has fallen by the wayside along with our window operations. The APWU has fought to address this but as management said “They run this place, not the Union.” And here we are. The recent national elections and mail ballots is a case in point.

I wanted to go after a U.S. Senator. I was told that the officer I was talking to agreed with me, but “if we don’t get him, he will get us.” I’ve never been at the national level so maybe I would see things differently.

I believe that the union was strong when we (all of us) were willing to take our lumps in our effort to improve our lot. I look at those pictures of thousands of working people marching. I wonder what happened.

You, the workers, are not responsible for the condition USPS is in. It’s the guys who run the place, and we know who that is! The Board of Governors.