By Erin Ragan – March 31, 2015
In a few weeks, mail processing by the U.S. Postal Service will come to an end in Cape Girardeau, which employees of the center say could lead to longer waits for letter and package deliveries.

St. Louis facilities will absorb all mail-processing responsibilities, leaving the Cape Girardeau facility as only a distribution hub.

The change in local operations comes as the U.S. Postal service is working through a second phase of consolidation, also called a “network rationalization,” that began in January and will end in the fall. The overall consolidation of the postal service that began in 2012 includes shifting processing, or origination and dissemination of mail, from more than 200 facilities across the country in an effort to save up to $800 million annually.

The current round of cutbacks includes 82 facilities, two of which are in Missouri. A Springfield, Missouri, facility will see changes similar to Cape Girardeau’s.

Now with processing going away, he said, additional delays are likely, as the Cape Girardeau facility no longer will see mail coming from ZIP codes that begin with “636” or “639” and will be handling mail only from ZIP codes starting with “637” and “638,” but it will be put on a truck and sent to St. Louis before coming back to be delivered.

“It is really bad now, and we are getting mis-sorted mail from St. Louis on a daily basis,” Davidson said. “People are getting bills the day after they were due. And now it is only going to take additional days getting where it needs to go.”

Davidson pointed to the recent loss of the city of Desloge, Missouri, water bills by the postal service and known delays elsewhere.

“That’s the kind of service problem we are setting ourselves up for, but in more places,” he said.

Postal service spokespeople have denied area mail delays in the past, and the postal service, in a letter explaining changes to customers in 2014, called the consolidation’s results so far “highly successful” and said the changes “resulted in negligible service impact, generating annualized cost savings of $865 million and required no employee layoffs.”

The changes in Cape Girardeau aren’t expected to prompt job losses, but about 35 employees will have to take other positions.

Local employees, such as clerks, are bidding on carrier jobs, Davidson said, but the number of positions is limited, and the process takes some time. 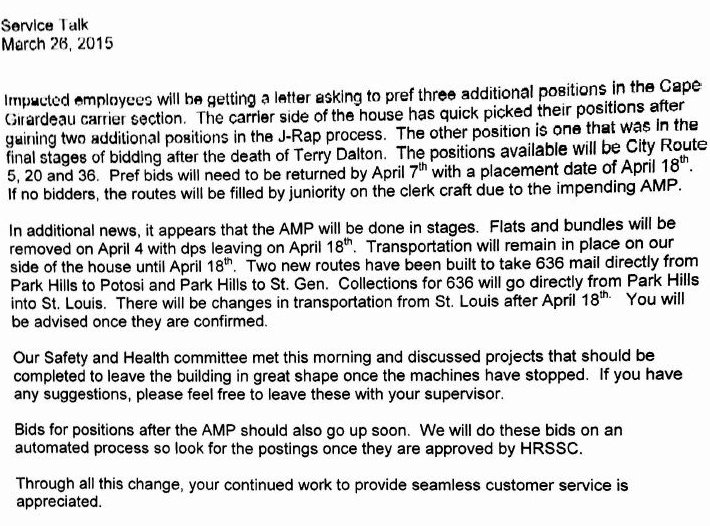 “We might have people sitting around for a while,” he said. “We really don’t know for sure that it will happen, but it seems like that’s how it happens everywhere else.”

In its letter to customers, the postal service said “this phase of network rationalization will establish the low-cost, technology-centric delivery platform necessary to serve the mailing and shipping industry for decades to come.”

Financial challenges for the postal service, according to its website, are associated with “declines in first-class mail volume and revenue, wage and benefit inflation, increasing operating costs, legislative mandates and significant debt pressures.”

A postal service spokesperson in November said the nationwide consolidation is necessary because more than 50 percent of the postal service’s stamped, first-class letter volume has declined in the past decade, and the service’s infrastructure is too large.

“What we are supposed to be doing is providing a service to the people who need that service, and first-class mail is huge,” he said. “We get millions upon millions of first-class letters going through the mail every day. I’ll have first-class mail in my mailbox today. So many people depend on it still.”

The service standard changes that took effect in January do not affect packages, medicine sent in any form and standard mail, which is primarily advertising, according to the postal service.

A study commissioned by the postal service and conducted last year also found “more than 80 percent of consumers say that adding one delivery a day to local and national mail would have ‘no effect’ or it would be a ‘change (they) could easily adapt to.'”

A postal service spokesman did not return a call Monday with a date confirmation for changes in Cape Girardeau, but a consolidation schedule released by the postal service shows the facility’s processing operations starting in St. Louis on Saturday.

The Cape Girardeau processing and distribution facility is separate from the post office on Frederick Street.