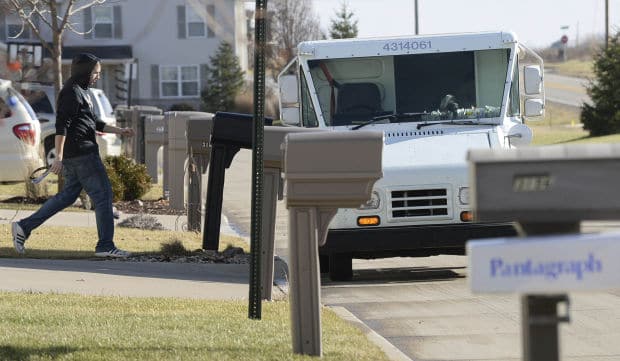 A U.S. Postal Service letter carrier walks back to his van after delivering a package along Shepard Road, east of Blackstone Boulevard in Normal in December. Some subdivisions won’t have the convenience of curbside mailboxes under a change by the Postal Service.

By Mary Ann Ford – January 4, 2014
NORMAL — Residents who live in the Trails on Sunset Lake subdivision don’t have to go far to get their mail.  Individual mailboxes are on posts near the curb, close to their homes on Normal’s far east side.  But future residents — and those of other new Twin City subdivisions — likely won’t have that convenience.

About two years ago, in an effort to cut costs, the United States Postal Service changed its mode of mail delivery for new customers. It encourages subdivision developers to use cluster box units that have about 15 locked mailboxes (and some parcel boxes) in one free-standing unit.

“It’s a decision from headquarters that post offices have to implement,” said Beverly Howard, corporate spokeswoman. “It’s designed to be the most efficient.”

But it’s causing some challenges for developers and municipal leaders.

“We developed plans five years ago outlining streets and sidewalks,” said B.J. Armstrong, one of the developers of the Trails on Sunset Lake. “Now midway through, the post office changed the rule.” 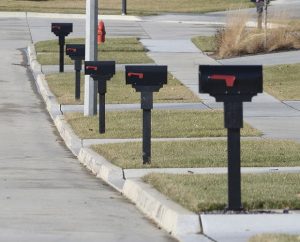 A line of individual mailboxes along Fieldstone Court in the Blackstone Trails subdivision in east Normal were installed before new guidelines introduced by the U.S. Postal Service.

The same thing is happening to Marty Trunk, one of the developers of Blackstone Trails, also on Normal’s east side.

“When we started the subdivision, the rules were not officially in place,” he said. “We did phase one (about 60 houses) with mailboxes at the curb. Now for phase two, the post office said it’s going to institute cluster boxes.”

Complicating the issue is that some cluster units already installed across the Twin Cities did not get input from Normal or Bloomington leaders.

“We need to tell them where to put them because of traffic issues and people stopping,” said Wayne Aldrich, director of Normal public works.

Bloomington Public Works Director Jim Karch agreed, saying placement of some of the units force people to walk into the street to get their mail.

“That’s a hazard,” he said. “We’re also concerned about snow operations and how it’s impacted by cluster mailboxes.”

Bloomington and Normal have policies for replacing mailboxes damaged when plows are removing snow from streets. The municipalities either will replace the mailboxes with standard mailboxes and posts or reimburse the homeowners at a set amount — $35 in Normal and up to $150 in Bloomington.

Cluster mailbox units are considerably more expensive — many more than $1,000.

“If they are hit, it’s a lot more expensive to replace,” said Mercy Davison, Normal’s planner. 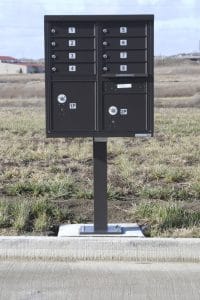 A “cluster unit mailbox” sits too close to Travertine Road in the Blackstone Trails subdivision in east Normal. It is one of several the town will likely ask developers to move because it is on public right-of-way.

Karch and Aldrich said some of the already-installed cluster mailboxes can remain where they are, but a few must be moved. That includes one in a commercial area in east Bloomington and a couple in residential areas in east Normal. City and town workers will contact those developers.

“We want them to be adjacent to a sidewalk and facing the sidewalk,” said Davison.

In the meantime, Howard said the post office will work with developers to determine the most efficient way to provide mail service to future homes on streets whose existing homes already have mail delivery.

One instance is Table Rock Circle in Trails at Sunset Lake. A couple of homes are complete but several more lots are available. Howard said if the path of the mail carrier would logically take him past future developed lots, those lots can have the same type of mailbox as the existing ones.

Once a certain type of delivery is started at an address, “we can’t arbitrarily change it,” Howard said.

via Mail delivery changes leave some subdivisions in a bind.