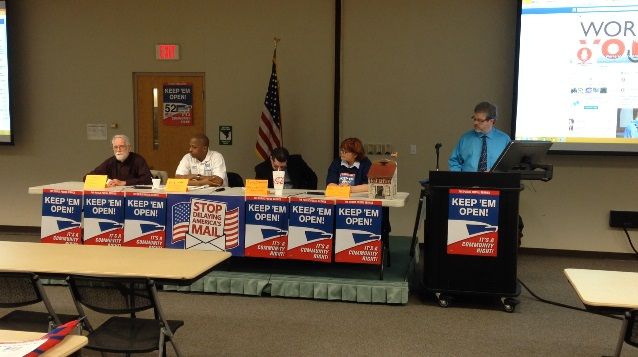 Voicing concerns: Members of the USPS Consolidation Coalition take questions from the crowd during Wednesday’s forum at Indiana University Kokomo. The USPS has announced it is closing the Kokomo processing plant on March 14.

By Josh Sigler – January 22, 2015
The United States Postal Service announced in November that it was set to merge Kokomo’s processing plant with the Indianapolis plant on March 14.

What does that mean for the consumer? A letter written to a neighbor three blocks over may take longer to reach its destination because it has to ride to Indianapolis, get sorted, then be sent back to Kokomo.

That could have a profound effect on the prompt delivery of medications and diabetes supplies, among a throng of other things, local postal workers say.

Members of the local postal workers unions are doing everything they can to get public awareness heightened that, not only are good paying jobs leaving town, mail delivery times could get dramatically slower. Workers argue delivery may end up worse than it’s been since coast-to-coast train service entered the scene as a mainstream form of transportation in the early 1870s.

With the deadline fast approaching, they are running out of time. But they’re not giving up.

“It will take a congressional act to make things right,” said Randy Obenchain, host of the Workers Voice Show, a local Internet radio broadcast. “We aren’t beyond the point of no return, and that’s what we’re fighting for you for. They’re not taking the mail out of the facility until March 14 and they aren’t shutting the processing facility down until April 14.”

The unions held a forum Wednesday night at the Kelly Center on the campus of the Indiana University Kokomo to brainstorm and get the word out that major changes are coming if something isn’t done.

The USPS claims it operated at a $5 billion loss in 2013, despite consolidation efforts and reductions in staff that have helped the service reduce its operating costs by $15 billion since 2006. Twenty-four employees at the Kokomo processing center will be forced to look for new work or transfer to the USPS’ Indianapolis processing center across the street from Lucas Oil Stadium on Capitol Avenue, a facility which is just a shade under 50 miles from Kokomo.

Those looking to transfer to Indianapolis will have a job waiting for them, should they choose to go that route.

Kokomo Area Local APWU president Patti Orndorff explained that some of those jobs will only be 30-hour-per-week employment.

In the meantime, the Kokomo processing plant on South Webster is connected to a Post Office center, meaning the electricity and heat bills for the full building will still need to be paid.

The panel also disputed the numbers reported by the USPS stating the organization is losing billions of dollars per year, including a $5 billion net loss in 2013.

Obenchain finds those numbers misleading. Parts of the 2014 Postal Reform Act passed by Congress siphoned $5 billion off the top of the USPS’ revenue and used it to fund the CIA’s pension fund.

“What’s misleading is they’re only projecting and showing numbers that they’re losing, but they’re not showing the overall profit that’s actually being made,” said Obenchain. “There’s $6 billion in profits being made, but $5 billion is being taken out in healthcare costs. [The latter] is the only part Congress is showing. They’re not showing the post office has been put in this position deliberately.”