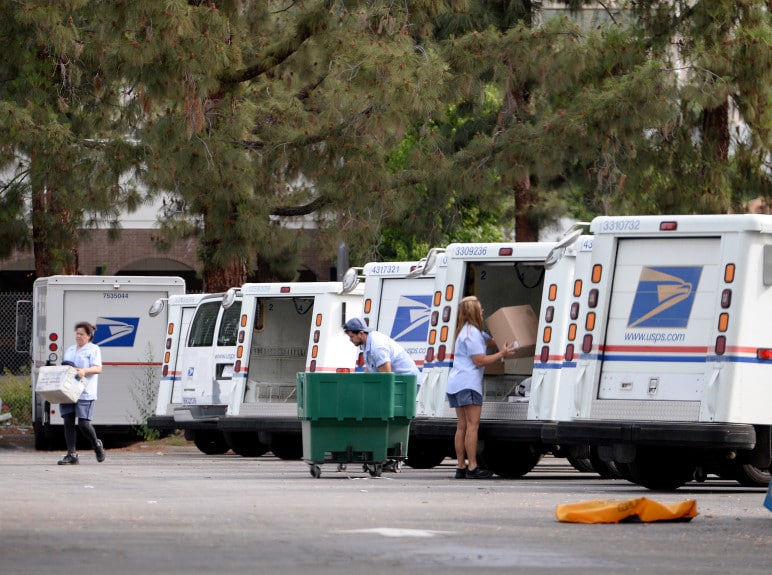 By Brenda Gazzar – September 24, 2018
A veteran U.S. Postal Service carrier, found unresponsive in her non-air-conditioned mail truck amid record-breaking heat in Woodland Hills this summer, died from overheating, according to coroner’s officials.

Peggy Frank, 63, of North Hills died on July 6 of hyperthermia, or abnormally high body temperature caused by a failure of the body to deal with the heat coming from the environment, according to Lt. Nani Cholakians of the Los Angeles County Department of Medical Examiner-Coroner.

The temperature hit 117 degrees in Los Angeles’ Woodland Hills community that day. It is unclear when she was found, but records say she was pronounced dead on scene at 3:35 p.m.

“I’m sorry that happened,” Frank’s sister, Lynn Calkins, who had shared a townhome with her sister for years until her death, said Monday upon hearing the cause of death. “I would never want anything to have happened to Peggy. I loved her.”

While Frank’s cause of death is listed as hyperthermia, other significant conditions Frank had were obesity and heart disease, Cholakians said.

These conditions will generally impact someone’s ability to regulate their body temperature, explained Brian Elias, chief of operations at the coroner’s office.

“Our thoughts and prayers are and have been with Ms. Frank’s family,” U.S. Postal Service spokeswoman Evelina B. Ramirez said in a written statement on Monday.

The Postal Service, which found out about the coroner’s report on Monday, does not comment on employee personnel matters, she added.

Ramirez has previously said the agency strives to ensure that mail carriers have the appropriate tools and training to deliver mail in all kinds of weather.

Shortly after Frank’s death, federal workplace-safety investigators launched a probe into her death.

“The safety of letter carriers is of paramount importance to us, and this case is a most unfortunate one,” said Brian Renfroe, executive vice president of the Washington D.C.-based National Association of Letter Carriers, in a statement. “We are working with OSHA (the federal Occupational Safety and Health Administration) and the Postal Service to implement heat safety measures to better protect the nation’s letter carriers.”

More than 600 people in the U.S. are killed by extreme heat each year, according to the Centers for Disease Control and Prevention. 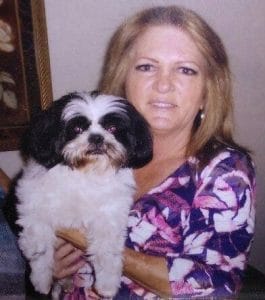 U.S. Postal Service worker Peggy Frank, 63, of North Hills was found dead in her mail truck in Woodland Hills on July 6, 2018. She is pictured here earlier this year with her dog, Snookie. (Courtesy Photo)

Frank was found unresponsive while seated in a postal vehicle by a coworker or bystander in the 4800 block of Calderon Road, according to coroner’s officials. Emergency personnel attempted to revive her without success.

Frank, a 28-year veteran of the Woodland Hills Post Office, died on her first day back to work after taking medical leave for about three months because of a broken ankle, her sister has said. She had slipped on some leaves one rainy day while on the job.

Her ankle was still sore and a little swollen, but Frank was told by a workers’ compensation doctor that it was time to return to her post, the sister has said.

Joni Hogan Salvatore, also a longtime mail carrier at the Woodland Hills Post Office, was saddened to hear her friend’s cause of death. She said Frank should not have had to work a full day after returning from medical leave.

“I think when someone’s been off work and it’s hot you need to take different steps and, hopefully, in the future they will,” Salvatore said of U.S. Postal Service officials.

In July 2012, a mail carrier in Independence, Mo., collapsed while working his route and died as a result of his exposure to excessive heat. An OSHA investigation found that the Postal Service “did not have procedures in place to address worker concerns during times of excessive heat,” according to the administrative agency.

In October of 2016, OSHA cited the Postal Service after two Des Moines, Iowa, workers suffered heat-related illness while delivering mail that past summer. The agency found that the two mail carriers, one of whom was told to continue walking her route despite feeling ill, were exposed to excessive heat.

Frank’s sister agreed that changes need to happen at the Postal Service, including making sure all of the mail trucks have air conditioning.

“I don’t want anyone to go through what we did,” Calkins said. “It’s sad that they put people through that.”