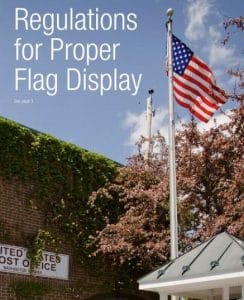 Regulations for the proper display of flags are in part 47 of the Administrative Support Manual (ASM). We have reprinted these sections of the ASM so Postmasters can ensure that the American flag, the Postal Service™ flag, and the MIA-POW f47 flag are properly displayed.

To read all of the regulations concerning the display of flags at Postal Service facilities, click on blue.usps.gov/cpim/ftp/manuals/asm/asmtc.pdf.

Except as governed by host facilities as noted in 472.21, the only flags to be displayed at postal facilities are the flag of the United States of America, the Postal Service flag, the POW–MIA flag, and, when authorized by the vice president of Corporate Relations, flags directly related to the programs, missions, and activities of the United States Postal Service. Flags of states, commonwealths, or local governments must not be displayed.

471.21 When Displayed on Flagstaffs

471.22 When Displayed on Speaker’s Platform

If the flag of the United States is not flown from a vertical flagstaff, the following regulations apply:

a. When the flag is displayed from a staff projecting horizontally or at an angle from the window sill, balcony, or front of a building, the union of the flag (blue field and stars) must be placed at the peak of the staff unless the flag is at half-staff.

b. When the flag is suspended over a sidewalk from a rope extending from a building to a pole at the edge of the sidewalk, the flag must be hoisted out, union first, from the building.

c. When the flag is displayed otherwise than by being flown from a staff, it must be displayed flat, whether indoors or out, or so suspended that its folds fall as free as though the flag were staffed.

No disrespect may be shown to the flag of the United States of America. It must never:

a. Be dipped to any person or thing.

b. Be displayed with the union down save as a signal of dire distress.

c. Be used as drapery of any sort whatsoever; never festooned, drawn back, nor up in folds, but always allowed to fall free.

d. Touch anything beneath it, such as the ground, the floor, water, or merchandise.

e. Be fastened, displayed, used, or stored in such a manner as will permit it to be easily torn, soiled, or damaged in any way.

f. Be used as a covering for a ceiling.

g. Have placed upon it, nor on any part of it, nor attached to it any mark, insignia, letter, word, figure, design, picture, or drawing of any nature.

h. Be used as a receptacle for receiving, holding, carrying, or delivering anything.

As soon after sunrise as practicable, the flag must be hoisted briskly to the peak of the staff. Care must be taken that it not touch the ground. The flag must always be displayed with the union (blue field) at the peak of the staff (unless the flag is at half-staff). No later than sunset, the flag must be lowered ceremoniously and not allowed to touch the ground. It must be folded or rolled carefully and stored where it will not be soiled or otherwise damaged. If the flag is wet when taken down, it must be carefully spread out and allowed to dry thoroughly before being stored.

Displaying the flag at half-staff means lowering the flag to half the distance between the top and bottom of the staff. The flag must first be hoisted to the peak of the staff and then slowly lowered to half-staff. When the flag is lowered for the day, it must be raised again to the peak and then lowered slowly before being stored for the night. When the flag is displayed at half-staff during a period of mourning, it must be so displayed on all days included in such period.

During severe weather when it is probable that the flag will be damaged, it should not be flown.

When employees are on duty in a postal facility, the flag must be displayed except in severe weather as noted in 472.14. It is raised as soon after sunrise as practicable and lowered at the time of closing or no later than sunset.

When the flag is being displayed, it must be flown at half-staff (see 472.132) on the following dates:

Note 2: On the last Monday in May, when Memorial Day is observed, the flag must be flown at half-staff from sunrise, or the hour at which it is raised, until 12 noon, and then hoisted to the peak of the staff, where it must be flown until the time of closing or no later than sunset.

When the flag is being displayed, it must be flown at half-staff on the death of any person as indicated in Exhibit 472.232.

Exhibit 472.232 Half-Staff Display on Death of a Prominent Person

Other occasions on which the flag may be displayed at half-staff include the following:

a. On days proclaimed by the president of the United States.

b. The heads of government departments and agencies may direct that the flag be flown at half-staff on buildings, grounds, etc., under their jurisdiction on occasions other than those specified which they consider proper. The vice president of Corporate Relations notifies area, district, and plant managers by either broadcast fax or electronic mail of such an order. They, in turn, notify the heads of all postal facilities reporting to them.

c. The flag may be displayed at half-staff on days when funerals of returned war dead are being held locally, when the flags on municipal, county, or state buildings and business establishments generally are being displayed in that manner.

The Postal Service flag is authorized for use as follows:

a. On or in front of Postal Service installations.

b. At Postal Service ceremonies.

d. At governmental or public appearances of Postal Service officers and/or executives.

e. In the offices of Postal Service officers.

f. By all Postal Service vice presidents of Area Operations, district managers, and all field units reporting directly to Headquarters.

g. On the approval of a vice president, when judged to be in the best interest of the Postal Service.

h. As otherwise authorized by the Postmaster General or designee.

Note: If any of these days fall on a non-business day, postal facilities are required to display the POW–MIA flag on the last business day before the designated day.

The POW–MIA flag must be displayed in a manner designed to ensure visibility to the public.

476.23 Placement with the United States Flag

No other flag should be placed above or, if on the same level, to the right of United States flag.

For a condensed version of the regulations above, see Displaying the U.S. Flag and the POW-MIA Flag.