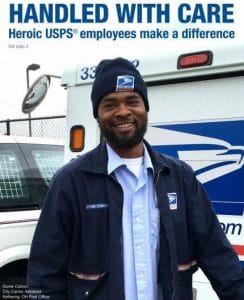 The sound was startling and the sight was worrisome. City Carrier Assistant Donte Cotton and a co-worker were outside the Kettering, OH, Post Office™ recently when they heard a loud bang and saw a nearby utility pole shake as sparks flew from a transformer.

Upon closer inspection, they found that a car had overturned after colliding with the pole. Cotton spotted a small child trying to move around in the car, so he got on his back and rescued the girl through a shattered window.

Cotton comforted her until emergency responders arrived and transported her and her mother, the driver, to a hospital for treatment of non-life-threatening injuries.

Cotton is one of several thousand employees who have been recognized through the Postmaster General (PMG) Heroes’ Program. These women and men have gone above and beyond the call of duty in a variety of situations: assisting lost children, getting help for sick or injured customers, spotting fires, and many more.

The program, established in 2003, is based on a simple idea: Postal Service™ employees know the habits of their customers and the rhythms of their communities, and are often the first to notify emergency personnel when they notice something wrong.

Employees must be nominated for the PMG Hero Award. Corporate Communications reviews nominations for accuracy, then sends them to the Office of the Inspector General and the Inspection Service for approval.

To nominate an employee, complete PS Form 400, Corporate Communications PMG Hero Nomination, and email it to PMG_HeroNominations@usps.gov. To download or print the form, go to usps.link/heroes, where you can also find the “Heroes’ corner” archives and read more stories about heroic employees.