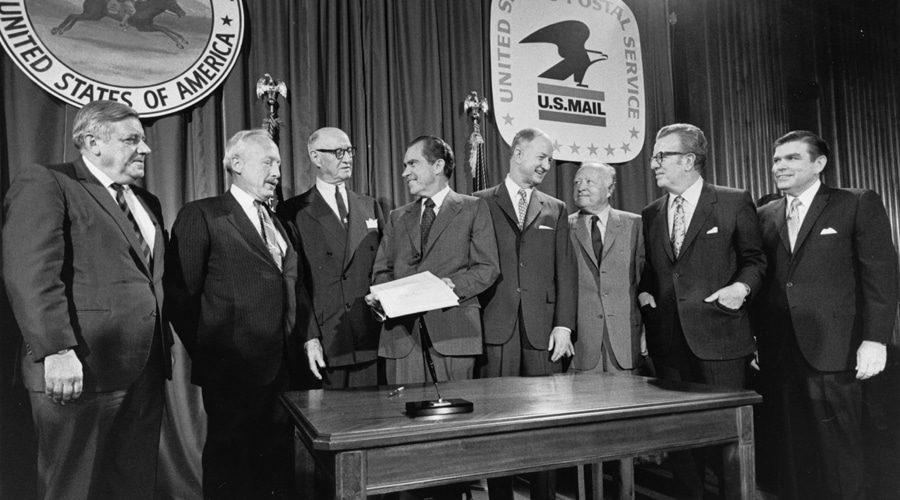 This week marks the 50th anniversary of the most comprehensive postal legislation since the founding of the republic — the law that transformed the Post Office Department into the Postal Service.

President Richard Nixon signed the Postal Reorganization Act on Aug. 12, 1970, but as Publication 100, the Postal Service’s official history book explains, the law’s origins can be traced to the previous decade.

In the mid-1960s, the Post Office Department struggled with outdated equipment, crowded facilities, underpaid workers and an ineffective management structure.

All important decisions — from buildings and equipment used, to how many employees could be hired and what they were paid — were made by Congress. This led to artificially low rates of postage, which were popular with constituents but led to a stagnant postal infrastructure.

When the Chicago Post Office became gridlocked with mail in 1966, it captured national headlines and ignited a movement for postal reform.

By early 1970, a presidential commission had recommended a departmental overhaul that was supported by Nixon but opposed by labor leaders. As Congress considered the recommendations, postal workers in cities across the nation went on strike — an eight-day ordeal that prompted Nixon to order the military to help sort the mail in New York City.

The strike helped shape the Postal Reorganization Act as it worked its way through Congress. The final bill that Nixon signed guaranteed retroactive pay increases and collective bargaining rights for postal workers, along with a more corporate structure for the new Postal Service.

Postal leaders are now working for legislative and regulatory reform that will allow the organization to transform its business model and effectively respond to ongoing volume declines and rapidly evolving market conditions.