1/29/2019
Washington, DC – The Postal Regulatory Commission today announced that Michael M. Kubayanda has been sworn into office as a Commissioner.

President Donald J. Trump nominated Michael Kubayanda to the Commission on June 6, 2018, and his nomination was confirmed by the U.S. Senate on January 2, 2019. His appointment fills the fifth seat at the Commission giving the Postal Service regulator a full complement of members. He will serve out the remainder of a six-year term that expires November 22, 2020. 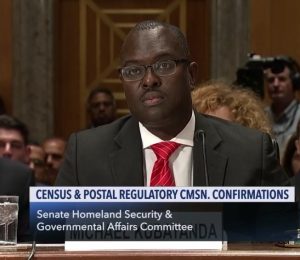 Prior to joining the Commission, Michael Kubayanda served as a board member and privacy officer for a digital health startup offering cloud solutions for medical practices in the United States and emerging markets. He previously worked with the Office of Inspector General (OIG) of the U.S. Postal Service, ending as Director, Government Relations, a role in which he worked with OIG officials to support the work of inspectors general in data analytics. In the OIG’s research group, he oversaw research on technical issues and wrote reports addressing postal economics and price regulation, intellectual property, and public-private partnerships, while serving as an advisor to colleagues on issues such as privacy, knowledge management, and innovation. Prior to his work with the OIG, he served on the staff of the House Committee on Oversight and Government Reform.