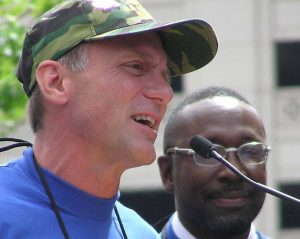 Our union needs a president that effectively resolves the issues facing our working and retired members, and I am that proven leader. I ask for your vote and support to become president of the APWU. When elected, I will put an end to the harassing work environment our members have been forced to endure. This longstanding issue has continued to worsen over the current president’s three terms. Talk and catering to a PMG who is hostile to our membership is not a productive strategy and doomed to fail. As your president, I will take action to ensure a work-environment of dignity and respect for our members.

Concessionary bargaining has resulted in substandard wages. APWU members now earn less money than other postal unions lower-level workers when at top steps. Career members hired after May 2011 have an unfair cap on their pay due to the two-tier wage scale, which the incumbent has failed to remove in three separate contract negotiations. Our members suffering a two-tier wage scale and making thousands less than USPS employees one or two levels below them is unacceptable. I will lead an untiring successful effort to restore pay-level increases and eliminate the union busting two-tier wage-scale.

Misleading information concerning pay continues as postal workers are pushed further behind due to COLAs that are a small fraction of inflation. Tiny raises and fractional COLAs dragged our members thousands of dollars behind inflation this year alone. Inflation’s 3-month average was 10% when the contract was proposed for approval, and its gains including COLAs will not be half that. Struggling financially as a single dad I understand how devastating that fact is. Upon taking office the giveaway contracts will stop, and I will never be dishonest or put personal agendas above our members needs.

I will revitalize and expand APWU’s veteran support and outreach. Not only is it the right thing to do, but our large number of veterans are also a huge factor in the public’s support for APWU legislative and contractual priorities.

PSEs and PTFs have been sold a bill of goods and unions should never turn a blind eye to inequality. Most PSE conversions were the result of PSEs regularly working the equivalent of a 40-hour workweek, attrition and retirement not acclaimed negotiations. The USPS has unprecedented hiring and short-staffing issues due to the substandard PSE starting wage and benefit package, never the case with career hiring. Once elected, I will work aggressively to expedite the conversion of all existing PSEs and then ensure all new hires are a career member and never leave our PTFs to languish year after year awaiting better schedules or a full-time opportunity which is now the norm.

The ruinous Postal Service Reform Act stealing benefits our members have earned is a betrayal to every working and retired member. Separating postal from federal workers health insurance was previously entertained by President Burrus. Once informed, APWU convention delegates mandated that APWU members will remain in health plans with federal employees. The incumbent ignored your elected delegates and championed the forcing of all retired and working members into the Postal Service Health Benefits (PSHB) program. Higher medical costs make postal-workers more expensive to insure and the smaller risk-pool will drive-up premiums and or reduce benefits. Assuming we do not lose our retirement health insurance going forward once separated from the influential, much larger federal workforce. Once in office, I will never trade away your hard-earned benefits.

Retirees are not the enemy. Once elected I will support our chapters, improve the Retirees Department and strengthen legislative efforts to protect and improve retirement for our working and retired members.

As your president, I have the drive, energy and qualifications to get the APWU back on track. Elected as your former national Legislative and Political Director and your previous APWU Health Plan Director; I have proven an incomparable work ethic while effectively serving our members. In my first terms, I revitalized the APWU Health Plan by stabilizing finances, creating improvements and making its top leadership more accessible to the membership; legislatively I was able to insert speedier 2012 service standards into the 2016 budget bill which would have prevented job losses, closures and consolidations (unfortunately, the incumbent president interfered last minute to remove that language to appease the NALC, leaving our jobs at risk). Prior to joining the USPS, I honorably served in the US Navy as a nuclear power reactor operator and afterward worked as an operator/engineer at the National Superconducting Cyclotron Laboratory demonstrating the ability to successfully work in high pressure situations where there is no room for error. Shortly after being hired by the USPS, I became union active and went on to hold several different positions in my local, state and the Michigan AFL-CIO. Before becoming a national officer, I served as steward, local and state president. Having been successful in many positions of authority utilizing an inclusive leadership style prepared me to be your next APWU president. We cannot solve today’s problems with outdated tools and methods.

One postcard to voters costs $100,000, the ability to spend a cadre of money should not dictate who wins APWU elections. A postal worker’s salary should enable any qualified member to be elected to APWU national office. Your leadership should be elected on ability, effectiveness and integrity, not wealth. Only 17% of members voted in the previous national election and the incumbent received less than 1/2 of that tiny amount. Demonstrating apathy that exists among our membership due to a lack of leadership at the top. We must revitalize the APWU and elect new leadership to achieve larger raises, cost of living increases that keeps up with inflation, affordable and secure health insurance, appropriate staffing, and the elimination of abusive supervisors and hostile work environments. If you agree, you need to get-out-the-vote to elect John L. Marcotte for APWU president. Your votes will change the outcome of this election and the direction of the APWU.