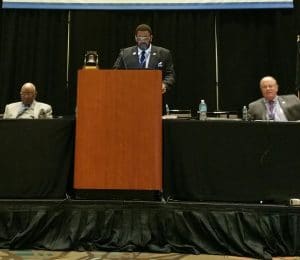 I have seen the smear campaign my opponent has started, and have been reading the negative comments that my opponent has chosen to attack me with, but I refuse to participate in any type of negative campaigning.

This is not about personalities; this is about what is good for the Motor Vehicle Craft.

It is in the best interest of the Western Region Motor Vehicle Craft to re-elect Jerome Pittman for National Business Agent. At this critical time in our fight to protect our rights and save our jobs we need proven winners.

I have settled millions of dollars in sub-contracting grievances, earlier this year a $900,000 arbitration award in San Francisco

Just recently in July 2016 I resolved the longstanding Pay Anomaly issue in Denver, which resulted in over $300,000 in pay raises and step increases backdated for two years, in addition to the promised $3000 from the PSE addendum.

I have reversed countless disciplinary actions
I have forced many PSE conversions, and new jobs to be created
I am an Instructor and give training classes on multiple subjects

I am a decorated former San Francisco fireman.

My record speaks for itself, but my opponent is obviously not happy with my work as your Western Region Motor Vehicle National Business Agent;

Apparently many others are!

I enthusiastically endorse and recommend Jerome Pittman for reelection to the position of Western Region MVS NBA of the American Postal Workers Union. It is very unusual for a MVS headquarters officer to get involved in regional union politics or elections, actually this is my first endorsement in over 15 years as a national officer. When I selected Javier Pineres in 2013 as my assistant in Washington D.C., that left a vacancy for the Western Region NBA.

While I certainly knew and respected Jerome’s work in the San Francisco local, at the time of the appointment he was not the craft director of the local, and was not selected.

He took his disappointment very graciously and set about getting elected on his own in an impressive victory over the incumbent.

I have been impressed with Jerome’s commitment to the MVS Craft, his eagerness to do a good job for MVS and get it right, his willingness to check with the MVS leadership to make sure his interpretation of the contract and Article 39 coincides with the national’s position.

It has been a difficult three years with the USPS continuous attacks on MVS and their attempts to contract out PVS, but with dedicated MVS officers like Jerome Pittman working with Javier and myself we have continued to fight the good fight in the most difficult times.

I look forward to working with Jerome in the next term, and recommend that he receives your support and vote.

Keep on trucking, the struggle continues.

“You have my continued support and my endorsement.”

“Jerome Pittman has served the MVS Craft with strong dedication, resilience and desire. Brother Pittman fights management at every turn He strives to keep his multi state case load current and delivers on his duty of fair representation. Jerome has diligently worked with the Regional Officers as we face a management determined to gut our crafts. The Brothers and Sisters of the MVS craft are blessed to have Jerome Pittman as their MVS National Business Agent.”

I have the knowledge, the education, the desire and the heart to fight for the rights of our members, and I want to continue to be a part of our solution as I have been in the past.

I respectfully ask for your support and your vote.

Expertise based on experience