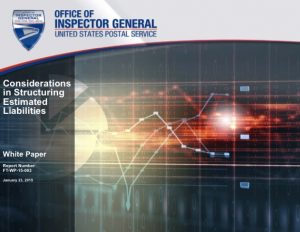 By David P. Hendel – February 10, 2015
Ever since the Postal Service “defaulted” on its annual $5.5 billion payment to the U.S. Treasury for retiree pre-funding obligations, it has been assumed that USPS is a pauper agency. But a new white paper issued by the USPS Office of Inspector General concludes that the value of the Postal Service’s real estate holdings, and other factors, far outweigh its retiree obligations.

The OIG estimated the Postal Service’s total retiree healthcare and pension liabilities at $403.8 billion. That’s a lot of stamps, but the Postal Service has already set aside $356.6 billion (83 percent) of this amount, leaving an unfunded liability of $86.6 billion. The OIG concluded that when this $86.6 billion is considered in conjunction with four factors, the agency’s assets would fully cover these obligations, and then some.

The next factor is the impact of interest rates. Over the past few years, interest rates have been at historically low levels, and this may have skewed current day assumptions about USPS’s long-term liability. Changes in interest rates have a dramatic effect. The OIG cites to a study that found even a modest 1.25 percent increase in the current interest rate would reduce unfunded liabilities by $72.3 billion.

Requiring postal retirees to use Medicare as their primary health insurer, backed up by their postal health care plans, would further reduce the Postal Service’s retiree healthcare liability by $42.9 billion. This would require a change in the law, but various postal reform bills have already proposed this change.

Taking into account all of these factors, the OIG concludes that the Postal Service has more than enough assets to cover its future obligations to retirees. Lawmakers, take note!