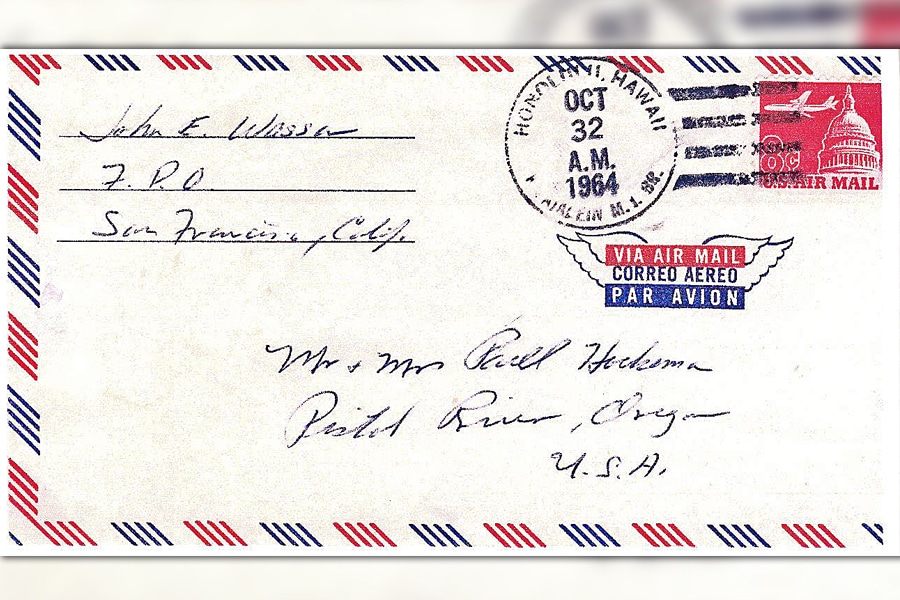 This envelope, mailed from Kwajalein in the Marshall Islands in 1964, shows the rare Oct. 32 postmark.

October is one of the seven months that has 31 days. Except for the year when it had 32 days — at one Post Office in the middle of the Pacific Ocean.

That office was the Kwajalein, Marshall Islands, branch of the Honolulu Post Office, which was located on an island of the same name. The United States administered the Marshall Islands as part of the Trust Territory of the Pacific Islands from 1947-1986.

In 1964, letters leaving the Kwajalein Post Office the day after Oct. 31 were postmarked “Oct. 32” instead of Nov. 1. And that was not a mistake.

Kwajalein is located just west of the International Dateline, which means when it’s Monday there, it’s still Sunday on the U.S. mainland.

So in 1964, the Army decided to sync Kwajalein with the rest of the United States by adding an extra day to October — only that year and only in Kwajalein. Saturday, Oct. 31, was then followed by Saturday, Oct. 32, and then Sunday, Nov. 1.

Most letters posted that day at the Kwajalein Post Office received a postmark of Oct. 32, according to Stephen Kochersperger, a senior research analyst at USPS headquarters in Washington, DC.

“Other letters got an Oct. 31 postmark because a clerk reused the previous day’s cancellation stamp,” said Kochersperger, who writes about the unusual postmark in the latest issue of La Posta, a postal history journal.

Kwajalein was resynched to the rest of the Marshall Islands in 1993.

The Marshall Islands became independent in 1986, but under the terms of its Compact of Free Association with the United States, USPS continues to provide mail service there.