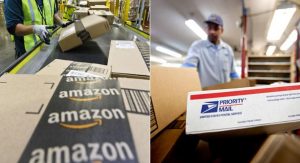 A former postal worker is alleging that preferential treatment of Amazon packages by the United State Postal Service is part of a larger trend toward valuing corporate partners over regular citizens.

In an article for AlterNet, Paul Barbot, a career postal worker, asserts that because of a secretive arrangement between the USPS and Amazon, “an Amazon package trumps all others received to deliver that day; even the ones that are more profitable to the postal service.”

The Daily Caller News Foundation has independently verified Barbot’s identity, and his employment with the USPS as recently as Jan. 28, 2015, through documents available online and public records.

In recent years, the Postal Service has faced mounting financial challenges brought about by declining mail volume and a congressional mandate to pre-fund employee pension benefits, leading to cost-cutting proposals such as ending Saturday delivery and closing rural post offices.

According to Barbot, “their latest solution is a relatively new business concept called the negotiated service agreement, or NSA,” which he predicts “will initiate the piecemeal morphing of the postal service from a public entity into one that is beholden to its corporate partners.” (RELATED: Penniless Postal Service Promotes Discounted Rates for Chinese Merchants)

David Williams, president of the Taxpayers Protection Alliance, told The Daily Caller News Foundation that, “This is something that we’ve been talking about for a while now: the distraction of the Postal Service from delivering mail,” which according to its charter is supposed to be its top priority.

“This could just be the beginning of the complaints. The more they do this, the more problems we’re going to see,” he predicted. (RELATED: USPS Getting Into the Business of Delivering Groceries)

Barbot, who until recently worked as a City Carrier Assistant (CCA) in Greensboro, North Carolina, notes that, “What’s actually contained within the document is anyone’s guess,” because the USPS has refused to disclose significant details of the agreement, but says his experience indicates “just how beholden [the USPS] is to Amazon.”

Barbot relates one instance in which he was instructed to return mail to the station, leading to a confrontation with the evening shift manager, who told him, “there better not be any Amazon packages in there!” Upon discovering two very small Amazon packages among the mail, the manager complained that, “great! Now I’m going to have to take these back out!”

In contrast to the manager’s concern for the Amazon packages, Barbot says he found it odd “that she left many Priority packages which the shippers paid top dollar to have delivered,” especially since they have a much higher profit margin for the USPS than do Amazon packages.

“Only time will tell” what other concessions will be made to appease Amazon or any another business who signs an NSA, he adds, but “one thing is sure, the postal service is changing and not for the better.” (RELATED: USPS Expands Into Yet Another Private Market)

“If the allegations are true,” Williams told TheDCNF, “it’s amazing that a supervisor would flip out over the fact that a couple of packages weren’t delivered,” especially considering the risk that, “people are going to notice when they don’t get their Priority mail on time, but when their Amazon package doesn’t arrive on time, they are going to blame Amazon.”

The most likely explanation, he said, is that the USPS knows it is the only option for Priority mail, whereas Amazon could switch to UPS or FedEx, and is “trying to prove to Amazon that, come Hell or high water, these packages are going to be delivered.”

“This is the frustration that people have with the Postal Service,” Williams added. “People want to like the post office; they want to like their mail carrier; but when they hear things like this they have a hard time.”