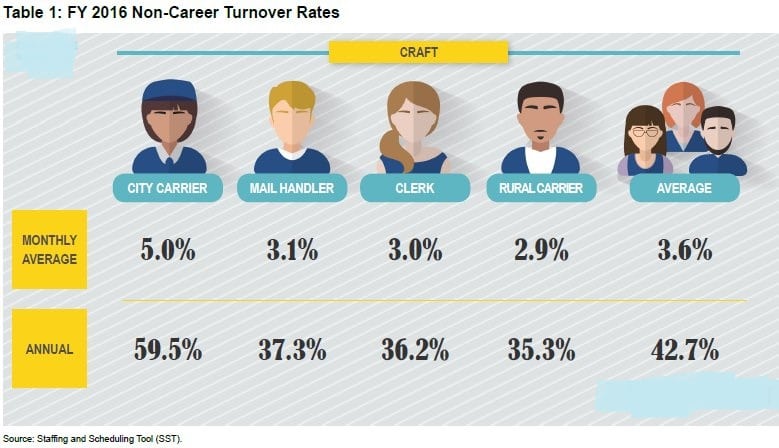 December 30, 2016
The Postal Service has increasingly turned to non-career employees–who cost the agency less because they do not receive full employee benefits and privileges–but the exceptionally high turnover of such employees partially offsets the hoped-for savings, according to an IG report.

The USPS currently has about 130,000 non-career employees to supplement its regular workforce in mail handling, processing and delivery but there is an annual turnover rate of 42.7 percent, well above even the relatively high 34.8 percent turnover that USPS had budgeted for, the report said.

In 2015, that turnover cost the Postal Service $95 million to hire and onboard replacements, it said, $23 million more than would have been the case if the turnover target had been met.

“These conditions occurred because the Postal Service does not have a recruitment and retention strategy to help reduce attrition rates to sustainable levels and ensure all non-career crafts are appropriately mentored and trained,” the report said.

In a sampling of departed temp employees asking why they left, the top reason was that the supervisor did not treat people with respect and had poor management skill. The next most frequently cited were lack of schedule flexibility, lack of benefits, low pay, and lack of training.