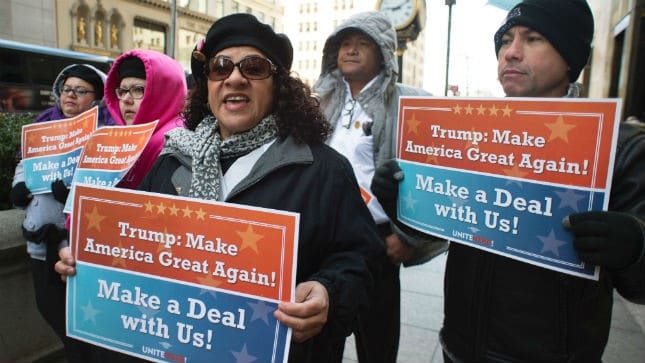 On July 28, 2016, a three-member Democratic panel of the NLRB said it would recognize a union organized by more than 500 employees at Trump International Hotel Las Vegas.

Don’t celebrate the recent APWU win at the NLRB in the Staples case. It is not likely to survive the next four years. House Speaker Paul Ryan will surely insert a sentence or two in a government appropriations bill to undo any gains postal unions have made.

Ignored during the Hillary email furor (as Bernie said, much noise over nothing) was this decision from the NLRB: Trump’s Las Vegas Hotel Is Breaking The Law. You can count on Donald Trump eviscerating the NLRB as soon as he can.

The last time we switched from a Democratic administration to a Republican one, they repealed the OSHA Ergonomics Standard. Remember that? A Republican Congress gave us the PAEA in 2006, which resulted in huge postal deficits and employee staffing and pay cuts.

Former House Speaker Newt Gingrich says he expects a fierce battle with federal employee unions similar to the one seen in Wisconsin after Republican Gov. Scott Walker stripped government labor groups of their collective bargaining rights. Postal unions will be lucky to keep their unique bargaining rights. I was hired before 1971 and remember what it was like begging Congress for pay raises.

One thought on “Hard Won Labor Victories are at Risk”