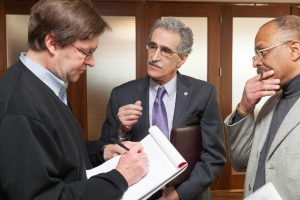 “I come here as a citizen and a child of postal employees,” Glover said, noting that he has been using the same San Francisco post office since he was 11 years old.

“I worry that the post office won’t be available for my grandson,” he went on. “It’s important for the public to be part of this discourse.”

Trumka added, “We are here to lend our full support to our sisters and brothers in the APWU. Their success is our success. We will stand with you for as long as it takes to save our Postal Service.”

Dimondstein talked about two competing visions for the Postal Service. One is cutting and slashing post office hours and closing plants. The other is a “vision of enhancing and expanding services.

“A post office that’s vibrant and here for the future,” he said, adding that “We are serious about the post office taking on financial services.”

Glover said that although the economy is expanding, many Americans haven’t felt any boost.

Trumka also noted the “continuous assault on working people for a number of years now,” adding that the Postal Service is “totally ingrained in the fiber of our communities and our nation.”