By Frank Newport and Steve Ander – April 2, 2015
WASHINGTON, D.C. — In a world of email, texts and social media, 41% of Americans nevertheless look forward to checking what is in their mailbox each day. Americans 65 and older are more likely than younger adults to enjoy checking the mail, but 36% of Americans under 30 also feel this way. 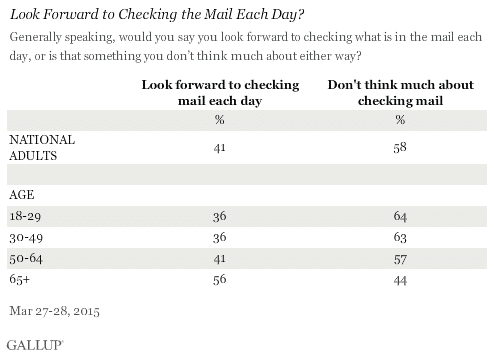 These data are from Gallup Daily tracking interviewing conducted Mar. 27-28. While more than six in 10 Americans now own a smartphone, and the vast majority of Americans have email addresses and communicate electronically, the results show that checking what the letter carrier brings each day remains a positively anticipated experience for a sizable minority of the public.

Of course, people can receive a wide variety of items in the mail each day, and Americans have a much more positive reaction to receiving some than others. In particular, over 90% of Americans say they have a very positive or positive reaction when receiving personal letters and cards. A sizeable majority of Americans also feel positively about receiving packages (83%) and, to a lesser degree, magazines (60%). Perhaps not surprisingly, sentiments are mostly negative when it comes to receiving letters from businesses, bills and especially advertising fliers. 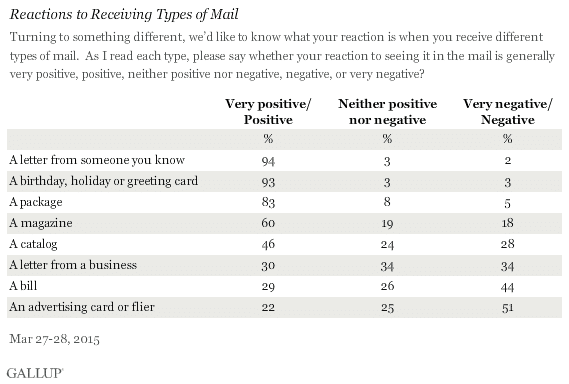 The positive response to receiving letters and cards is consistent by age. Ninety-five percent of 18- to 29-year-olds say they feel positively about receiving a personal letter, including 30% who feel very positively, higher than any other age group.

Americans who say they look forward to receiving the mail each day are more positive about getting every type of item than those who don’t think much about checking the mail. This difference between the “anticipate mail” group and the more indifferent group is particularly pronounced when it comes to receiving magazines and catalogs. Much of this gap could be due to the consumer and media preferences of those who do not think much about the checking the mail, including the fact that younger and middle-aged Americans may simply be less likely to receive catalogs and magazines. 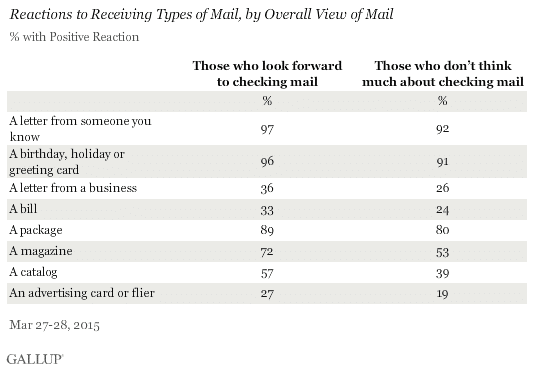 Despite the electronic revolution in communication and commerce in the last twenty years, millions of Americans continue to be interested in their daily interaction with the U.S. Postal Service and associate positive emotions with the mail — in particular, with receiving personal letters and cards. These results, coupled with the previous finding that eight in 10 Americans still visit a post office a few times a year, and that nearly half visit at least once a month, show that the perceived value of old-fashioned mail service is still high among many Americans. While it is likely that people have always had a positive reaction to receiving personal mail, these types of deliveries are probably less and less common in the digital age, explaining why checking the mail on a daily basis may not be as routinely anticipated now as once may have been the case.

These results have mixed implications for the quasi-governmental U.S. Postal Service. While Americans clearly like the thought of receiving personal mail, the actual sending of letters is declining rapidly. The fact that younger Americans are less likely than those older to look forward to receiving their mail each day also suggests the possibility of a dwindling overall interest in mail in the years ahead. As a result of these trends, the USPS has concluded that market-dominant products like first-class mail are becoming less impactful to their business, and has shifted its emphasis to packages. This shift finds support in the attitudes of the American public, who view receiving packages almost as positively as getting personal letters.

Still, the deluge of electronic email, texting and social media updates most Americans receive on a daily basis today may mean that a “fresh” way of communicating — like a personal letter or card — may have increasingly unique value. Cultural practices often move in cycles, and it may be possible that Americans’ strong emotional bonds to personal letters and cards means that this “old-fashioned” means of communication could have a renaissance, or at least not become extinct, in the years ahead.

via Four in 10 Americans Look Forward to Checking Mail.